Quick. Give me a rundown of everything we know about Australia!

“Uh, didn’t it start as like a prison or penal colony or something?”

Okay, well that’s not going to make people want to visit, knowing the entire continent is inhabited solely by convicts and their descendants. How do we spin it?

“Movie tie-in, maybe a sequel to Escape From New York.”

Love it. Next fact!

“They like shrimp. And Barbie dolls, for some reason.”

“Yeah. That’s like all they talk about down there. ‘Shrimps and Barbies!’ I think it’s kind of like how that word ‘Aloha’ means like 80 different words for Hawaiians because they’re lazy.”

Okay, you know the drill fellas. Spin it!

“We do a cross-brand promotion with Mattel. Shrimp Barbie. She’s got cute pincers, maybe a tail you can crack open and eat. Comes with an Australian flag.”

Do they have a flag?

“I believe it’s upside down because of the hemisphere, but I’m 70% sure they have one. I’ll have the interns confirm.”

Good. Get those Wikipedia folks on that. Alright, keep ‘em coming people!

“Everything down there can kill you in like two minutes.”

What do you mean?

“Seriously. Everything. Spiders, ants, snakes, jellyfish, octopus, even the snails down there can be deadly.”

Jesus. No wonder they hired us to get people excited about tourism. Okay, skip that. People can worry about all the deadly crap AFTER they land and get off the plane. New idea. Quickly!

“They all drink Foster’s!”

YOU SHUT YOUR MOUTH, PETERS!

I don’t care if they ARE backwater savages descended from the dregs of society living in a harsh wasteland teeming with death at every possible turn. YOU HAVE NO RIGHT TO IMPLY THEY WOULD EVER DRINK SOMETHING SO TERRIBLE AS FOSTER’S! THEY’RE STILL PEOPLE, DAMMIT.

Guillen, Peters is out. You’re in. Get your gorilla idea to the printers ASAP.

Wear this shirt: Upside down to simulate what it’s like on the Southern Hemisphere.

Don’t wear this shirt: In Australia. They don’t even have gorillas there.

This shirt tells the world: “This and Crocodile Dundee are pretty much the extent of my efforts to learn about those guys.”

We call this color: Grass on ya, mate. 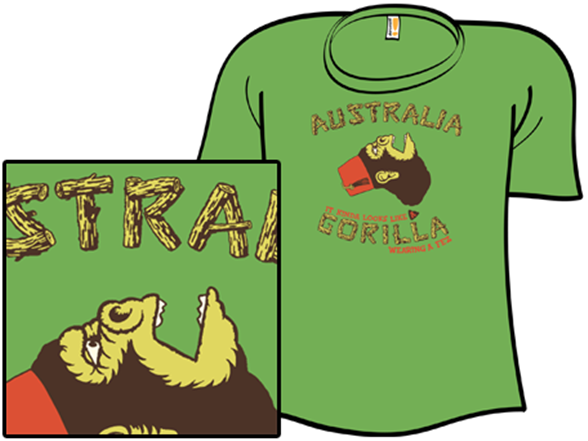 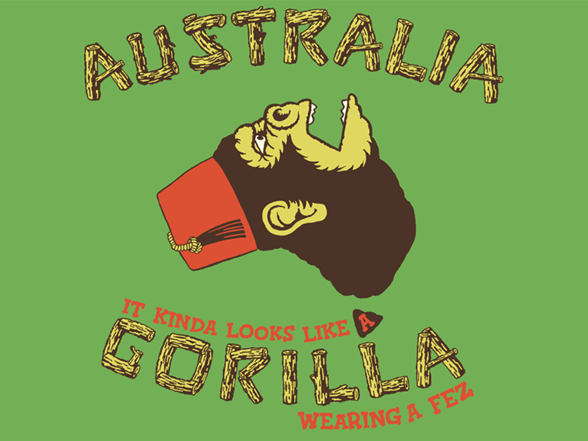 James Flanders once had a Dog of Flanders. Honestly, it wasn’t the typical tale of luck and overcoming adversity you’d expect a boy and his dog to have.