INTRO: BLACK TITLE SCREEN, WHITE TEXT. CUE SCARY MUSIC, SOMETHING LIKE “TUBULAR BELLS” BUT CHEAPER TO LICENSE.
You paid good money to see that first one…

FADE TEXT OUT. CUT TO SHOT OF PEOPLE SLEEPING IN BED, AKA 99% OF THE MOVIE.

POT SCARY MUSIC UNDER. CUE AUDIO: CONFUSED AUDIENCE MEMBER
What the? This isn’t even scary. This is like two hours of B-roll. This thing sucks.

FADE TO BLACK. FADE UP WHITE TEXT
You naively went back to see the second one, thinking somehow it’d be better…

FADE TEXT OUT. CUT TO SECURITY CAM SHOT OF WOMAN STANDING IN A HALLWAY. SCARILY.

CUE AUDIO: ENRAGED AUDIENCE MEMBER
What the *&%$ IS this?! THIS IS THE SAME EXACT MOVIE! I’ve now paid to see TWO ENTIRE MOVIES where nothing happens!

FADE TO BLACK. FADE UP WHITE TEXT.
So we figure you’re dumb enough to want to see THIS one, too…

FADE TEXT OUT. CUT TO SECURITY CAMERA FOOTAGE OF SOME KIDS PLAYING OPERATION. A BOOK FALLS OFF THE SHELF BEHIND THEM. THEY SEEM NONPLUSSED.

CUE AUDIO: CURIOUS AUDIENCE MEMBER
Ooooh. This time they at least play a game. Is it in 3-D? I guess I’ll see it.

POT UP SCARY MUSIC. FADE UP WHITE TEXT.
Paranormal Activity 3. Coming Soon. Because we’re going to keep doing this until you idiots stop buying tickets, just like those SAW guys.

Don’t wear this shirt: If you truly feel like you’re under siege from a demonic entity. You’ll want to die in something a little more dignified.

This shirt tells the world: “It’s funny because it takes a childhood memory about which some people might feel nostalgic and TURNS IT ON ITS HEAD! I wonder if anyone else does stuff like this?”

We call this color: I could never pull the Baby Blue bucket out without getting a shock. 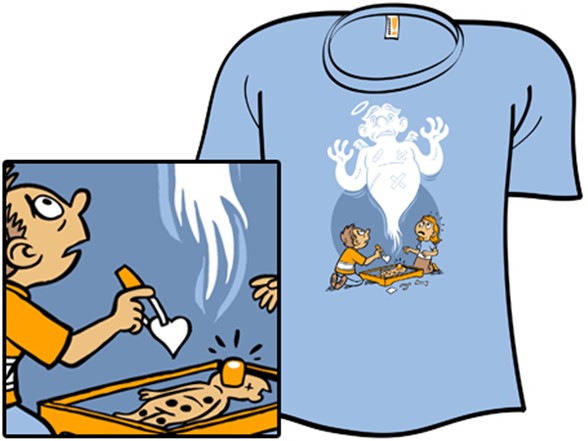 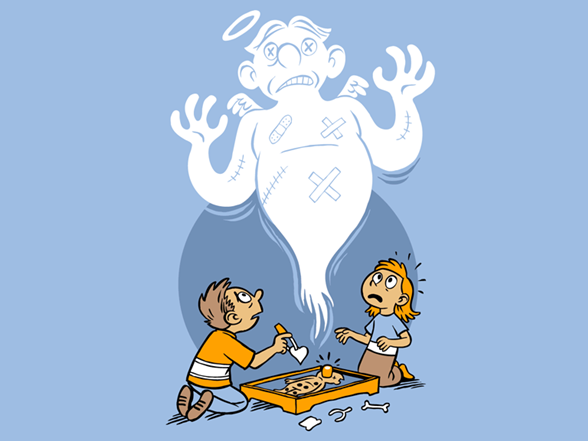 He thinks he’s so educated and he’s so civilized ‘cause he’s a strict vegetarian, but with the over-population and inflation and starvation and the crazy politicians he don’t feel safe in this world no more. He don’t wanna die in a nuclear war. He wants to sail away to a distant shore and make shirts ‘cause he’s apelad.