Yeah, I mean, I guess it’s really just me and the Polyphonic Spree with this many instruments.

This horn, I bought that online. Used to be the horn that Maynard Ferguson used to use. I really only play it ironically though. Like, the Batman theme and Rocky and all that kinda music. I mean, I’m good, but not in a way I mean to be good, it just happens without any effort. You want a PBR? I got a free hand.

Yeah, I keep them in my piano. Unexpected, right? Then I drink it right out of my saxophone. I read in this blog post… oh, it’s nothing you’d know, it’s this obscure place called Huffington Post… mostly it just talks about what was on The Daily Show last night… oh, cool, you watch The Daily Show? Wow, it must be mainstream at last, right? Yeah, it’s been going downhill for a while now. I mostly just use it as vocals for when I’m playing my drums.

Anyway, they say David Bowie used to drink PBR out of his sax. Do you like this hat? No? Yeah, I didn’t think you would. I bought it at a flea market for eight hundred dollars. It’s an original, they only made a few thousand of these back in ‘56. I found this old ticket in the brim, figure if I find the place, I can get a free pair of shoes maybe. Pretty nice, huh? Hey, let me play you something on my bass, from this band I found called John Zorn.

Wear this shirt: after you order it overnight. Then you can be wearing it before anyone else is wearing it.

Don’t wear this shirt: after the regular shipments begin to arrive. It’ll be sooo played out by then. Until it comes back as retro, at least. There’s a complex math to this sort of thing.

This shirt tells the world: “This next one’s a jazz cover of a song by The Swell Maps, you probably won’t know it so don’t feel bad.”

We call this color: Yeah, I Used To Tag Up The Asphalt But I’m More Into Sculpture Now 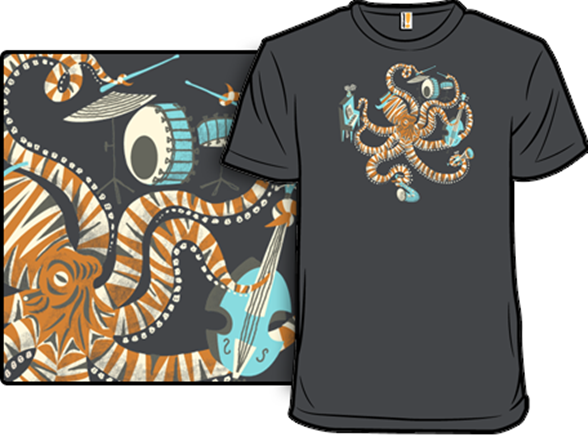 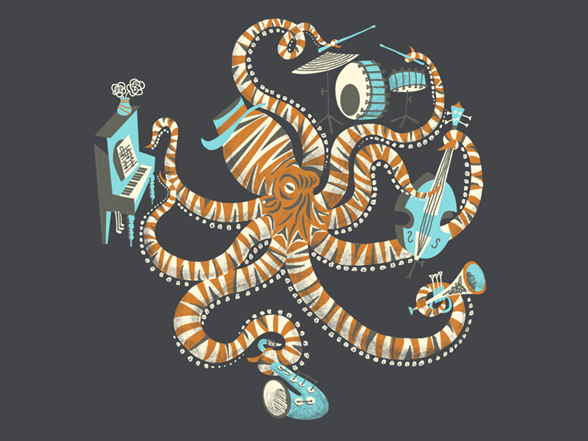 brockART had a bio back when nobody had bios. Nobody cared back then. Now everybody’s ripped him off and you want him to put a bio up? Whatever, dude. Whatever.