It's sad, isn't it? Watching him try to play a game in which he cannot be included.

After school, all the fruits got together to practice rhyming so they would be ready once rhyme team tryouts came around. They were all at different skill levels. Banana had been doing it the longest. He was good. He could rhyme two syllable words, even complete sentences. But when it came to sheer volume, nobody could touch Orange.

"Fork, dork," he said. "Butt, smut. Tug, rug. Slow, dough." He could keep going like that for hours it seemed, so it was no surprise when he made the team and ended up being their leading scorer.

Once colleges found out about his skills, they started sending recruiters to his house to shake his parents' hands, give him a pat on the back, and say stuff like, "University of Minnesota's got a heck of a rhyme program, son." or "At West Texas State, we're looking to build something from the ground up, and we want you at the center of everything."

It went to Orange's head. He started acting cocky in practice, taking all the rhymes for himself. Well, Banana didn't like that. Sure, maybe he wasn't as good, but he deserved a few rhymes here and there. After all, rhyming was a team sport.

So, one day, after Orange had taken fourteen straight rhymes himself, Banana said, "Yo, Orange. I got a tough one for you: you."

"That's because it's not what I meant," said Banana. "What I'm looking for is something that rhymes with your name: Orange."

Orange laughed. "That's the challenge? My own name?"

Orange got into rhyming position, and said... nothing. "Give me a second, I'm tired," he said, standing back up.

"Maybe you could save some of your energy by passing the rest of us a few rhymes now and then," said Banana. The gym was totally silent now.

Orange's grin disappeared. He got back down into rhyming position. "Orange..." he said, but then stopped. "Orange..." Again, no follow-up. "Orange..." now he was screaming, but still nothing. 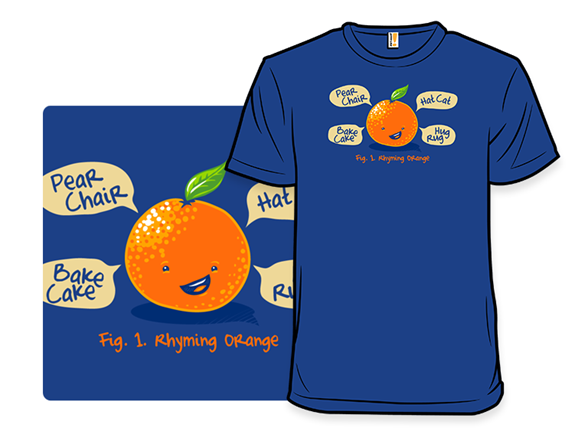 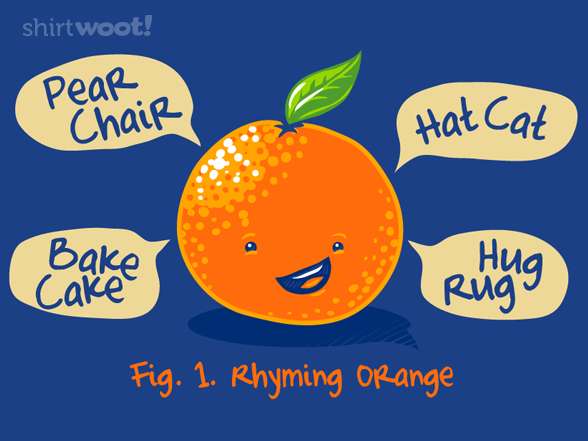 tjost thinks pomogranite would also be hard to rhyme, but nobody ever talks about that!