Whenever we get depressed about the state of world affairs, we like to look back at documentary films from the ‘30s and ‘40s for inspiration. Things were really tough back then, but people were still able to keep a positive attitude and accomplish amazing things. Things you and I might even regard as impossible.

Like for example, we saw footage of this one guy pushing a piano out of a sixth-floor window, then sprinting down the stairs in time to catch it with his bare hands before it smashed on the sidewalk. Who would even try such a thing now? That’s just the kind of can-do attitude people had back then.

That particular scene was from a great series of documentaries we rented on DVD from the Fleischer Studios all about this sailor which hates all palookas what ain’t on the up and square. Even though his life is marked by episodes of shocking, savage violence, he somehow maintains a cheery disposition, never succumbing to defeat, even when a romantic rival tries to run over his head with a roller coaster. (His whole peer group is prone to extremely volatile relationships.)

But that’s how it was back in those days! Americans didn’t say “quit.” They didn’t give up. They didn’t even necessarily plummet to earth when they ran off the edges of cliffs or tall buildings, unless some Debbie Downer insisted on calling their attention to the absence of ground beneath their feet.

We wish we could restore some of that faith people used to have in themselves and their future. That brand of psychotic, irrational, reality-denying, non-Newtonian optimism would be a huge asset today. This shirt reminds us of that.

Wear this shirt: at all times during your date with that flat foot floozie, unless you want a dose of the floy-floy.

Don’t wear this shirt: in color.

We’re not sure what this shirt tells the world, exactly: but it says it in a hilarious voice. 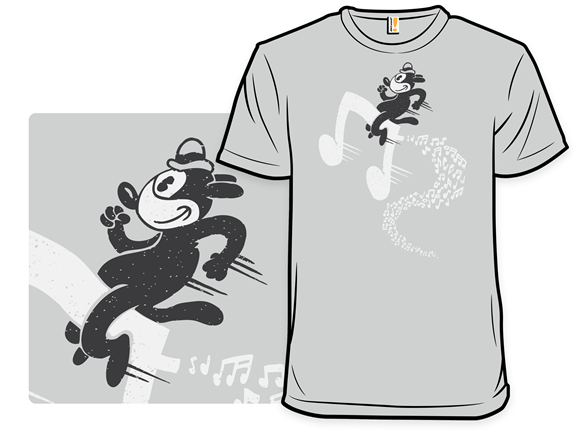 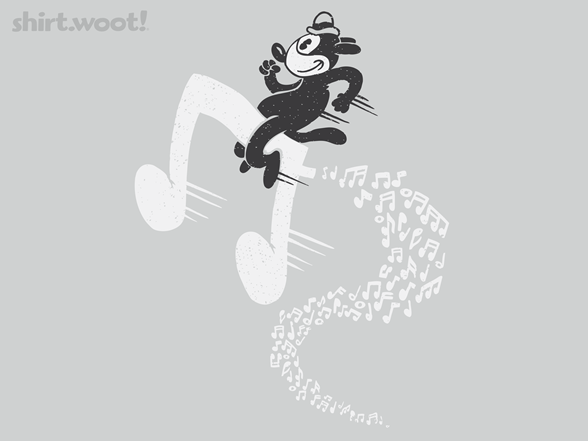 From this design, you might peg David Creighton-Pester for a Tin Pan Alley man, but actually his all-time favorite song is “Tic, Tic Tac” by Carrapicho.