And lo, many days after the rains did ceaseth, a dark shadow did appear below the waves off the ark’s starboard.

Yea, a great and powerful beast, which Adam had named “Giant Squid”, did riseth from the deep and stretched its hulking tentacles across the ark’s hull. Verily, the ship did creaketh and shaketh, and the giraffes did howleth, and the lions were made timid, and the geese were made unsilly.

But Noah did not fear, for he kneweth that the Lord did haveth his back. Verily, he did strideth from his cabin to the bow of the ark, and shaking his staff disapprovingly did spaketh, “Begone, Giant Squid. This ark is not a giant crustacean with which to filleth thine belly. Go forth, and I shall not have to harm you, as all of the Lord’s creatures are mine buddies.”

But the Giant Squid listened not. And the platypuses did hisseth, and the hippopotamuses did belloweth, and the cats did “lol”eth.

Thus then did Noah spaketh sternly, “Verily, I hath warned you. Now shall you face the wrath of the Lord!” And lo, he did raiseth his staff high into the air, and the Lord did blesseth his staff and transformed it into a belt. And from the sea did two large electric eels leapeth into the hands of Noah, and he did lasheth them together with the whipping belt of the Lord, creating Eel-chucks with which to smiteth his tentacled enemy.

Lo and verily, Noah did fighteth the beast of the depth in a battle of epic wonder that even the angels of Heaven did watcheth. And lo, it was awesome.

Wear this shirt: for 40 days and 40 nights in a submarine.

We call this color: Under The Royal Blue Sea 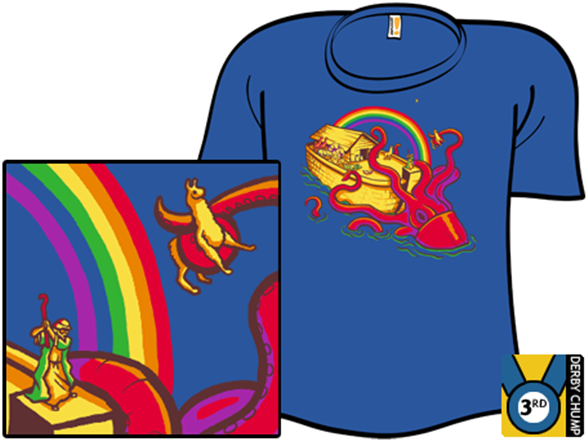 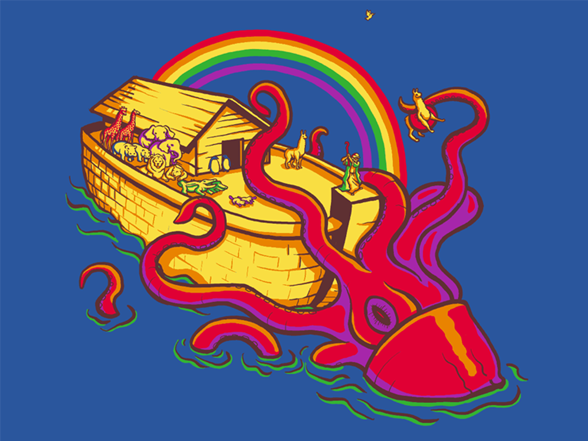 MeteoDesigns is so going to get hit across the knuckles with a ruler for this one.