As you can clearly see by these drawings, gentlemen, Early Man’s greatest fear was eradication by beings, or “invaders” from space.

We know very little about the people who left these markings. They were a very reclusive tribe, as far as we can tell, one that didn’t seem to venture out into the light much. Some claim they may have even traded goods and services to neighboring tribes for the delivery of a strange circular meat-covered flatbread, as evidenced by the many crust-like fossils found littering the floors of the inner most caves. They may have also worshipped a sun-like god that they believed was capable of “eating” evil spirits and demons once an offering was made. Truly a fascinating people, to be sure.

One thing IS certain, however. Before disappearing completely (probably due to problems with the males’ lack of courtship skills), they left us a warning. According to these carvings, it was their fear that an alien race would decend from the heavens to destory mankind. In rows. For some reason. And in the year 1978. So, you know, they weren’t the Mayans, that’s for sure.

Now if you’ll all excuse me, I’m late for a meeting about the planning of our next big expedition. Legend has it that ancient technologies belonging to the Atari tribe lie beneath the New Mexican desert and that they may be extra-terrestrial in nature. Good day, gentlemen.

Wear this shirt: while exploring the treasures of retro-gaming.

Don’t wear this shirt: if you’ve never heard of the Konami code.

This shirt tells the word: “Game over, man. Game over.”

We call this color: The Blackness From Beyond Space 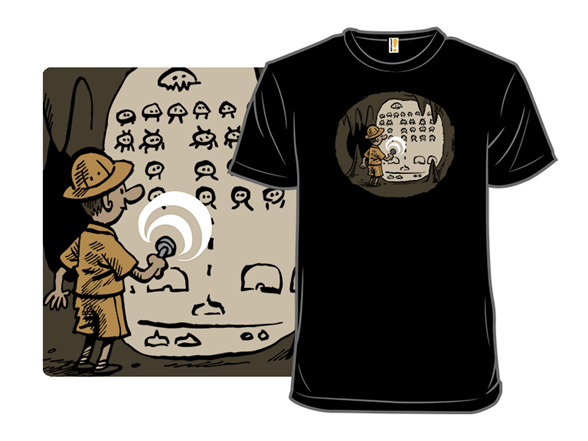 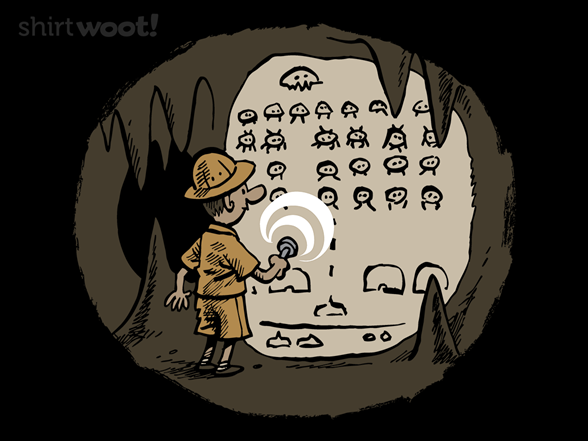 Adam Koford can’t tell you what exactly he’s working on at Disney Interactive, but I’m guessing it may have something to do with mice.