From the tales the elders told around the campfire, he knew that he hadn’t always been a Pawnee. He’d heard the tale enough times, about how Chief Chicken Hawk, the man he knew as Father, had kidnapped him in a raid on a white settlement. He could almost see himself as a chick, Father cradling him in one arm as they jounced across the prairie. He could almost hear the clup-clup of the horse’s hooves and the whoops of the exultant Indian raiders. But he never thought about anything that came before. He never wondered where his white family was – he had all the family he would ever need. He was born a chicken, but he lived and fought and loved as a Pawnee.

So when Chief Chicken Hawk passed on, he assumed the headdress, so like his own feathers but carrying a meaning and power of its own. He pecked at his enemies, crowed over their fallen bodies, clucked out commands to the Pawnee fighters. And because they’d seen his bravery, because they respected the father that hard raised such a son, the warriors obeyed. Or tried to, anyway. Nobody could ever understand exactly what he was saying. That’s why the U.S. cavalry was able to rout the Pawnee so badly in the first battle under Chief Many Feathers. Captured and humiliated, the “Rooster Chief” was taken in shackles to be displayed before the King of Belgium on a state visit to Washington, D.C. His ultimate fate is unknown, but probably delicious.

This shirt was designed by: the artist known as Alvarejo, whose talent is as singular as his name.

Wear this shirt: when you’re butchering chickens, to let them know you honor them as worthy adversaries. Then maybe they won’t haunt you.

Don’t wear this shirt: with your feather boa, feather roach clip, and feathered hair. That’s just, like, too many feathers for one outfit.

This shirt tells the world: “The Indians are coming home to roost.”

We call this color: Navy-A-Doodle-Doo. 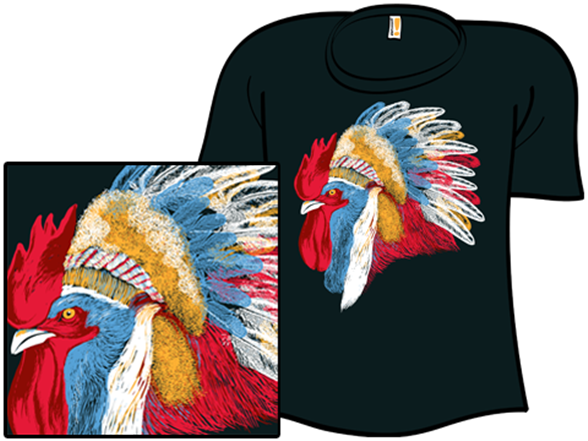 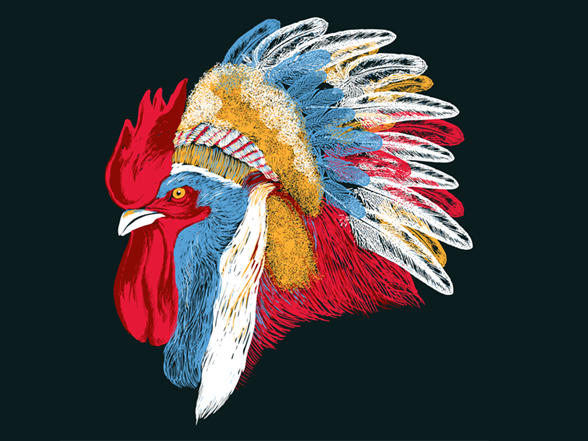