The holidays are a time when everyone gathers together to accept what made them all decide to leave home in the first place, only this time with more emotional baggage than they left with. And you know what? That’s how it is supposed to be.

This great nation exists because some people got sick of taking some other people’s crap. From the Pilgrims to Columbus to those Vikings that may or may not have sailed here first, every non-Native American is on this soil because someone yelled out “No, screw YOU, PAL!” and got on a boat. So why hide it?

For this most American of hoilidays, the celebration of having leftovers, show your love for your brothers, sisters, comrades and in-laws by stretching the meaning of “freedom of expression” as far as it can go. They might act upset, but deep down, in their American heart, they’ll understand. And they’ll love you for it. Because it will finally give them an excuse.

Wear this shirt: because it’s like the best thing ever. I mean, that potato has a pair of sai and the pepper shaker looks so… well, not really sad, but more like you would look if a work-friend fell over but you knew you might get promoted if he wasn’t able to come in any more and you also weren’t in any danger.

Don’t wear this shirt: if you’re going to start asking questions like “If that slice of pumpkin pie is alive and the rest of the pie is also alive is the pie made of ten or eleven living slices or is it just two living pieces consisting of a big living part and a little living part?” because that really isn’t something we’re prepared to discuss.

This shirt tells the world: “Never turn your back on the butter.”

We call this color: Brown The Stuffing Before Filling The Bird So That It Will Be Ready For Combat Immediately 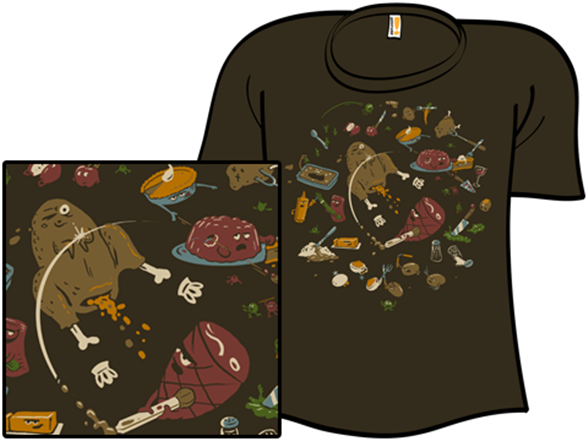 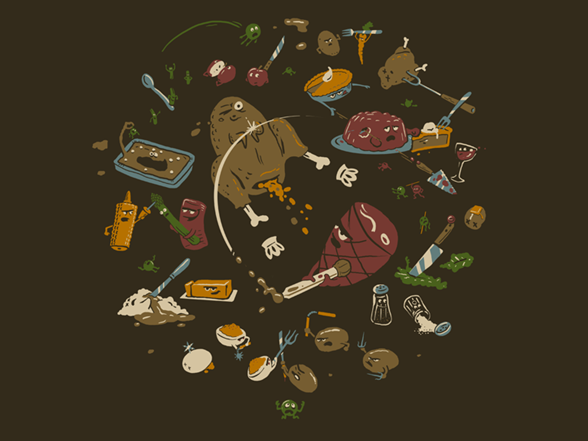