We’ve been waiting for an opportunity like this to take down those Parker Brothers and give ‘em a good what for. Sure, it’s been around in one form or another for over 105 years. Sure, it’s helped people learn about single tax theory and land grabbing. Sure, a special edition was even made to help WWII prisoners of war escape from Nazi prisons. The game’s got a long and storied history, but it can’t change this one simple fact:

Seeing someone grab a Monopoly box from the closet full of games is like hearing the judge issue your life sentence in prison. Your heart sinks, you feel your stomach climb up into your throat, your eyes sting with tears, and your mouth salivates in an attempt to lubricate itself for the vomit you will soon be expelling.

From then on it’s an endurance trial, as every time a Monopoly board is unfolded from the box it generates a bubble of altered space-time much like the event horizon of a black hole, where to outside observers the players seem frozen in place forever. It is a documented fact that the shortest game of Monopoly ever played lasted a “mere” 42 hours. Three people died from either dehydration, boredom-induced aneurysms, or self-inflicted wounds made with a miniature top hat.

Yet somehow they continue to propagate this “game” throughout toy stores everywhere. New editions come out, as if renaming Boardwalk with a street from the Simpsons universe or your favorite NFL franchise would make constructing tenement housing and predatory rent prices more fun.

You want to know what a game of Monopoly is like? Imagine a tiny pewter boot stamping on a human face – forever.

Wear this shirt: While justifying another trip to McDonald’s under the guise of “MAYBE THIS TIME I’LL GET THE BOARDWALK PIECE! ANOTHER 20-PC. CHICKEN NUGGET, PLEASE!”

Don’t wear this shirt: To game night at the local nerd hangout, unless you like cries of “We play TABLE TOP GAMES, here, not your ridiculous board games!”

This shirt tells the world: “I’m going to marry into your family and ruin every Thanksgiving and Christmas gathering for the rest of your life by suggesting we all gather ‘round the table and play this monstrosity.”

We call this color: I would rather grind my face off onto Asphalt than play this game 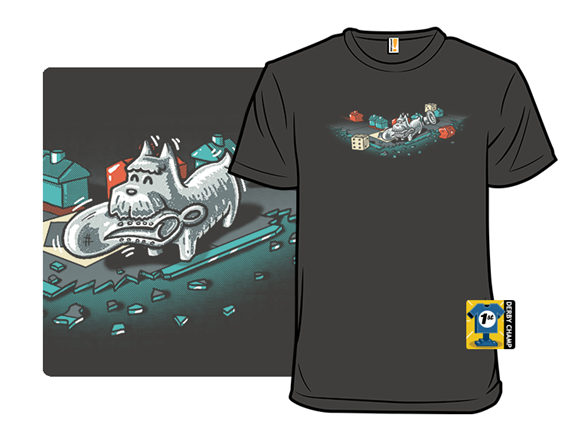 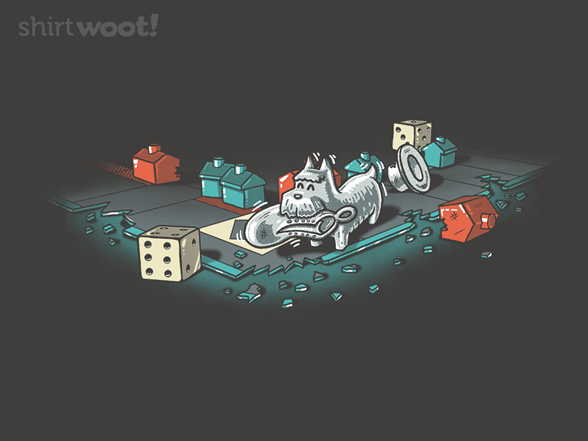 Walmazan and kevlar51 played for 16 hours, neither one willing to admit that a two-person Monopoly game is about as fun as a two-person suicide pact.

Hometown:
Hanover, MD
Links:
In the Library With the Wrench
kevlar51 on Facebook
walmazan.com
walmazan on Facebook