It appears we are doomed.

It has been four days since the storm that sent my ship crashing against the shore of this wretched island. I have done my best to keep the spirits of the men high as we attempt to repair her, but with provisions dwindling, it is a hard task indeed. The damage to the hull is extensive and it will take quite some time to make her sea-worthy once again. The cook, however, has told me in secret that he believes we shall run out of food within three days. Some of the men have already succumbed to fatigue and the grim realization that we may not survive, covers all we strive to accomplish like a wet blanket. Still, I am hopeful that a solution will present itself.

March 4th – I have instructed the cook to use the cargo we were charged to deliver back to England to sustain ourselves. Coffee, however, while it does energize the crew, is a poor substitute for food. I have sent two of my best men into the jungles of this place in hope of finding something, anything, that can be deemed edible, but, alas, even I have lost faith.

March 7th – A miracle has occurred! My men have discovered some rare bird on this island that tastes of the most decadent pastries I have ever eaten. Hundreds of them, in fact! And they seem to be strangely attracted to our coffee! We have set up large pools of the stuff to lure them out of their hiding places and the birds jump right in! Finally, I believe our horrible fate may be reversed!

March 12th – The chocolate-frosted ones are delicious!

March 16th – We may have gone slightly overboard (HA!) with our cravings. The creatures are decreasing in number. It seems the only birds left are those that are filled with jelly, and no one seems to want those. One of the crew spotted me with a few of the cruller variety I had stolen away for myself. I fear a mutiny may be at hand.

March 20th – They are gone. All of the silly, stupid, tasty birds have been devoured by our ravenous appetites. Every inch of the island has been searched, but no tasty morsel can be found. What have we done? My god, what have we done?

On a side note, the ship has been ready for a few days now, so we’ll be leaving shortly! Hooray!

Wear this shirt: while you’re on a diet as a reminder you of what you can’t have.

We call this color: Lemon-Custard Filled 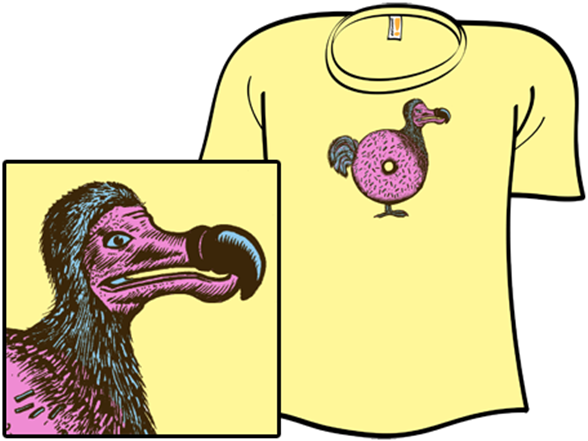 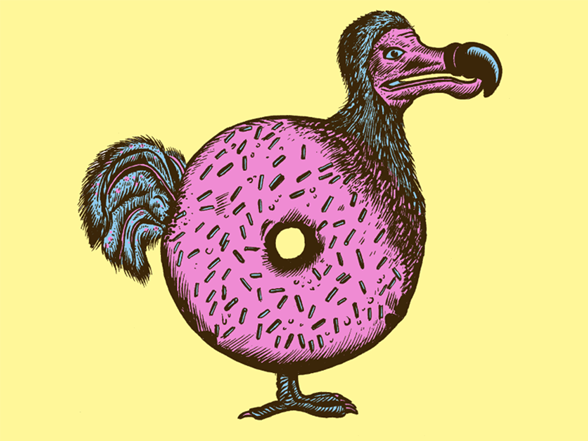