Crime plagues the streets of the city, where the screams of the innocent echo through desolate canyons of concrete and steel. But of late, crime has a new enemy. In dark alleyways, where urban scoundrels of every variety stalk their victims, a mysterious vigilante stalks them in turn, striking terror into their pitiless hearts! Rooting evil out from wherever it hides, and dragging it into the light like a worm pulled from a muddy patch of earth!

Who—or what—is this feathered fighter of crime? They call him… THE BAT-ROBIN. No, that’s right. Bat-Robin. Seriously, that’s what they call him.

Unlike other heroes, Bat-Robin has no super powers. No super-speed, no super-strength. In fact, he can’t even fly, which is weird, because he’s a bird. But he has these little grappling hooks he throws from one tree to the next, which works OK. He has trained his tiny body to be in peak fighting condition, and he could match any Olympic weightlifter or gymnast his size, if such an Olympian existed and was similarly disadvantaged by having wings instead of hands.

Bat-Robin has also studied science, criminology, psychology and engineering at elite levels, and has become the world’s greatest detective who is also a bird. There’s a pretty steep drop-off in quality to the world’s second-greatest detective who is also a bird, it’s true. Second place is a magpie that’s unusually skilled at finding shiny things. But first place, Bat-Robin, is still pretty good.

Be warned, you fiends who prey upon the weak and defenseless! Tremble, evil-doers of every stripe! Especially if you are afraid of birds, which some people are, it’s one of those phobias! A masked figure of merciless vengeance has built his nest in our filthy, crime-ridden city! And his name… is BAT-ROBIN.

He also has a sidekick, a bat in a red suit called Robin-Bat, but never mind him; he’s lame.

Wear this shirt: into battle against the cowardly, superstitious lot of squirrels that keep raiding your feeders.

Don’t wear this shirt: to the movies with your parents.

We call this color: The Dark Knavy 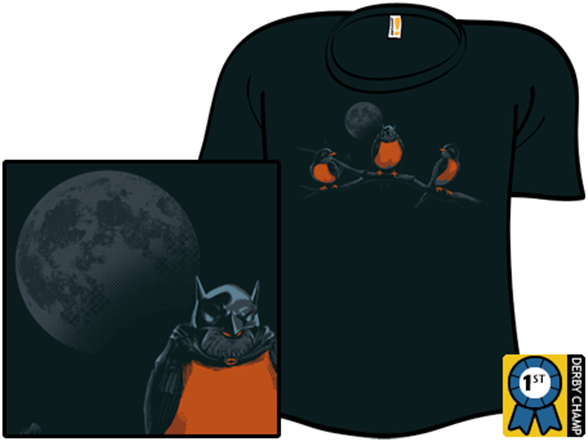 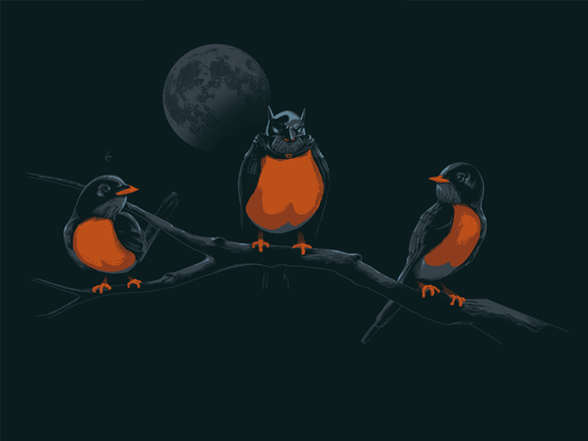 jamescho84 dresses in spandex too, but it's more of a sexual fetish than anything to do with vigilanteism.