Once there was a elephant who wanted to explore the world. His mother told him to b careful. The elephant started his trip with a visit to the c, where he met an alligator. The alligator said his name was D and invited the elephant to come closer. “Eee!” shouted the elephant suddenly as the alligator lunged. “F you, you little jerkface!” the alligator responded, grabbing hold of the elephant’s nose. “G, something is happening!” cried the elephant. And, indeed, it was, because h and every muscle in the elephant’s nose was getting stretched! “I won’t let go!” the alligator snarled, but just then, a rifle sounded, and the alligator was shot! The elephant looked to see who had saved him, and found none other than J.K. Rowling! “Llo,” she said in her charming accent. “Mmm mmm,” the elephant responded, and then, suddenly realized that he could no longer talk! “Nnnn!” the elephant cried helplessly! J.K. Rowling held him close as he cried. “O you poor dear,” she cooed as she brushed his hair, “Never you worry. Just mind your P’s and Q’s and no one will ever notice.” Notice what? the elephant thought to himself, but then, suddenly, became aware at how his nose had been stretched, and felt the fury release with an angry RRRR! And then, suddenly, the elephant woke up and it had all been a dream, mostly because it was five o’clock on a Friday and the rest of the letters were really hard ones.

This shirt was designed by: srglancey, who either made up some letters or used a couple alphabets because, I mean, it’s a great drawing, but what letter is that eye supposed to represent? And don’t tell me it’s a D because that’s not a D, a D goes the other way.

Wear this shirt: with your ELEPANTS HAHAHAHAHA what do you expect, we already said it’s five on a Friday. We don’t just sell all that wine for the fun of it.

Don’t wear this shirt: when going piano shopping. That’s like putting an egg on a chicken sandwich or watching Highlander II. It just isn’t polite.

This shirt tells the world: “Yeah, go ahead and order, I’ll be right there as soon as I come up with a gag about the shirt color.”

We call this color: Lemon Yellophant SEE YOU MONDAY WOOOOOO 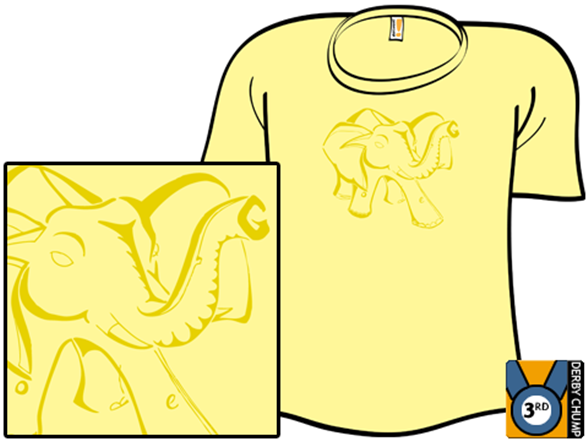 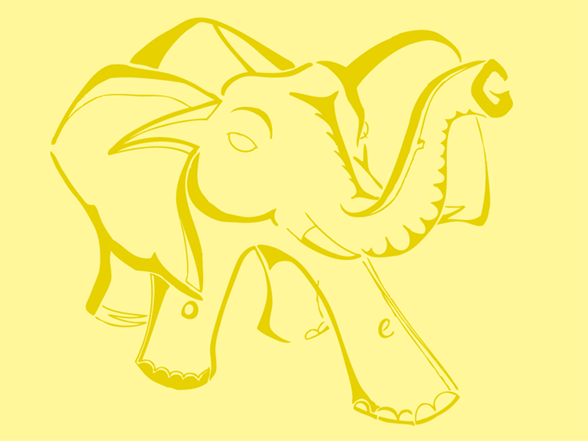