When the sheriff and I finally arrived, the fight was over. The gruesome aftermath was like nothing I’d ever seen. The three avocados had been mashed into an almost unrecognizable pulp. Two jalapeño peppers were in there too, and they’d been minced up pretty good.

There was a clove of garlic that looked like he’d been put through a press. And a lime that’d gotten itself sliced clean in half. The juice from one half was squeezed out all over the place. A Roma tomato looked to have tried to come between the others and break it up, but only succeeded in getting hisself chopped to pieces.

A small white onion might’ve gotten the worst of it. He’d been quartered, can you believe that? Then one of the quarters was all minced up real fine.

I also saw a pinch of salt that I assume had just been in the wrong place at the wrong time, and got caught in the middle of it. And a teaspoon of olive oil. I still don’t know what that was doin’ there.

It was far too late to to help any of ‘em. They was done for, the whole gang. All there was left for the sheriff and me to do was fetch the corn chips.

Wear this shirt: as a base layer to keep your zarape from chafing your nipples.

Don’t wear this shirt: among the Aztecs, from whom we get the word “guacamole,” but to whom it means something like “testicle sauce.”

This shirt tells the world: “there’s a party in every bowl! If, by ‘party,’ you mean a brutal, knock-down, drag-out, no-holds-barred, bare-knuckles fight to the death.”

We call this color: Their Pulped Innards Had Gone Brown In The Desert Sun 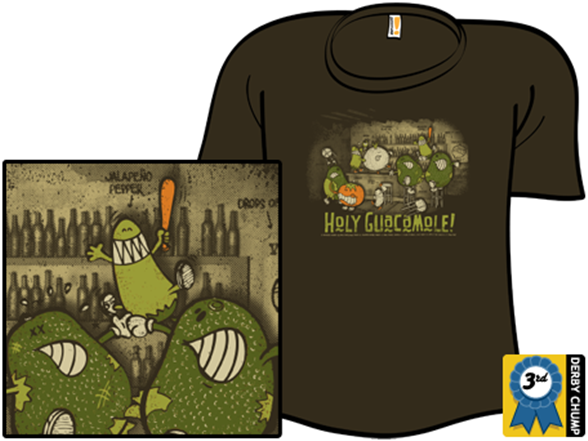 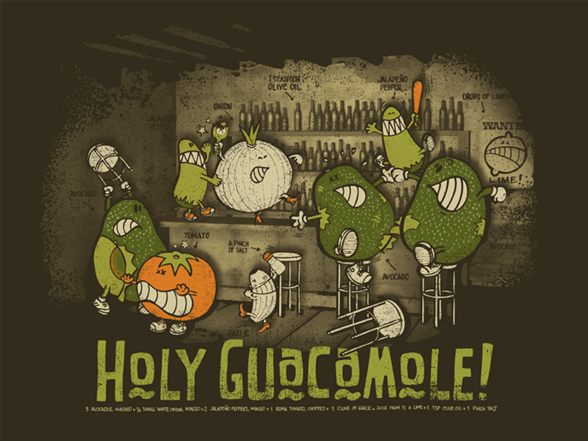