A kitten bigger and stronger than anyone lived with his animal friends on the side of Mount Ashigara.

One day a samurai saw young Kittentarō fell a tree with his bare paws and, impressed with the kitten’s incredible strength, offered to teach him the ways of the honorable warrior. So Kittentarō left his mother and his home to train. As the years went by he grew even stronger, often beating bears in sumo wrestling matches. He fought and dispatched demons, making the hillsides safe for villagers once again.

Once a full-grown cat, Kittentarō changed his name. From then on, he would be known as Sakata no Kittentoki. The samurai who had brought the kitten down from the mountains, Minamoto no Yorimitsu, took the feline as his personal retainer in Kyoto. There, Sakata no Kittentoki studied martial arts and became the chief of Yorimitsu’s four braves.

One day the villagers came to find Sakata no Kittentoki, crying that a great, evil carp had made his home in the river near the village and ate all who dared swim or bathe or fish there. This was the moment Sakata no Kittentoki had waited his entire life for. He ran straight for the river and, upon its banks, released a mighty yowling cry. He dove into the water and met the demon fish head on. The two battled for days, while the river foamed and bubbled and churned as if possessed by magic. The villagers feared the worst.

On the fifth day, Sakata no Kittentoki emerged; he was soaking wet, his fur matted to his sides, but he looked to be much, much heavier. The brave warrior cat said nothing, but upon seeing the villagers’ imploring eyes emitted only a large belch and patted his stomach contentedly.

Wear this shirt: While recording a three minute intro for a 30 second YouTube video of your cat looking annoyed.

Don’t wear this shirt: While marching through the woods looking for some animals to wrassle. Animals like to wrassle naked.

This shirt tells the world: “I’m a big fan of Japanese art and culture, just not the parts with all the tentacles.”

We call this color: Asphalt Oni 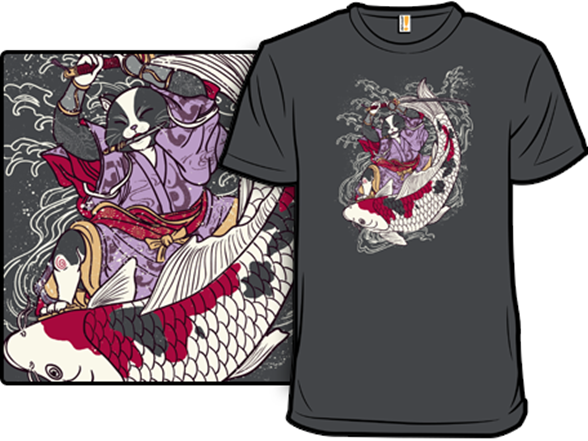 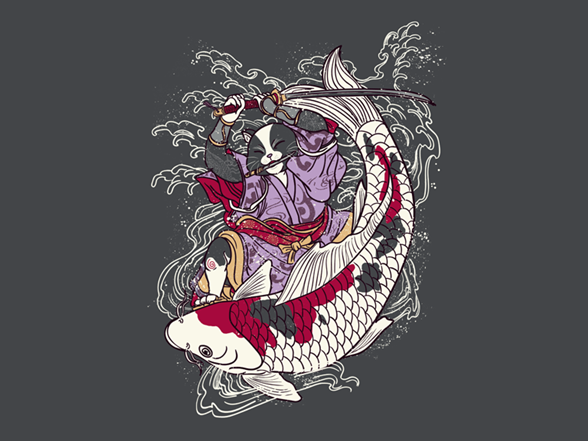 William Chua, we always figured you for more of a “peach boy” kind of guy.