The only airline that just comes out and says it: there’s nothing you can do.

Are you sick of airlines with empty promises about “friendly skies” and “affordable rates?” Well have we got a refreshing idea for you: Honesty Airlines.

Are we the best airline out there? Not at all. In fact there are several options that are actually better: they’re cheaper, they have better customer service, more comfortable planes, and to be perfectly honest they’re less likely to crash. But you’re not here for the BEST airline. You’re here for the most honest airline.

So fly with us! First you’ll need to buy a ticket. This is needlessly complicated because the TSA nightmare infecting our airports has made it virtually impossible to buy a ticket at the airport. Instead you’ll want to navigate our clumsily-constructed website with confusing menus, annoying pop-ups, and broken links. Oh, and you’ll have to read a lengthy sales pitch on our Frequent Flier program before we let you do anything. Once you buy a seat, we’ll randomly re-assign you based on a mathematical formula that determines exactly your least-desired seating arrangement.

Bringing bags with you? We’ll be charging you for checking your bags. This is a ridiculous plan to encourage people to bring their bags onto the plane, where they won’t fit in the overhead bins. A smart airline would charge for carry-ons, encouraging more checked bags and thus freeing up cabin space, but we’re not a smart airline. We’re an honest airline.

Once aboard, our flight attendants will instruct you on FAA regulations, which you should feel free to disregard as the odds of an FAA agent finding out are incredibly low. You’ll be asked to turn off your cell phone mainly so you don’t annoy the crap out of everyone else on the plane. That business about crossing signals is mostly bogus. Mostly. Once you’re crammed into a seat too small for the average American girth and stuffed into a row so tight that your knees are wedged against the seat in front of you, we’ll sit for about 50 minutes because we didn’t get clearance or the toilet is leaking or something. This is because while most airlines like to maintain the illusion of competence, the truth is most people maintaining the aircraft work terrible hours for not enough pay and are often sleep-deprived.

You can fasten your seat belt, or not. A seat belt’s really not going to help you in the event of a crash. Speaking of crashes, statistically speaking you are less likely to die in a plane than in a car. However, car crashes don’t usually give you 15-20 minutes of free fall to ruminate on just how horrific your death is going to be. Also, seat belts can sometimes make a difference in a car crash. Once you’re slamming into the earth at 450mph it really doesn’t matter. Oh yeah, your seat cushion floats. Allegedly. We’re not sure how a bundle of springs and metal rods designed to be as uncomfortable as possible could float, but the FAA says we have to say that.

Once in the sky you can sit back and relax as the pilots are probably sleeping or drunk or both. Lucky for you the autopilot usually works itself out. You can have a free soda and pay $8 for a sandwich that would cost you about 30 cents to make at home. On a long-distance flight? We offer a selection of terrible, horrific movies and television shows that no one would ever want to watch. Except you, when you realize the screen is broken and you have nothing to do for your five hour cross-country flight.

Once you’ve arrived you’ll notice we’ve strategically placed you in the back of the plane and every feeble, slow, and borderline stupid person in the front of the plane. This is to ensure that it takes no less than an hour to deboard, especially if you decided to just hold it rather than get up and fight your way up the aisle to the bathroom which was most likely occupied, broken, or recently vacated and smelling like a dumpster full of hot sauce and used diapers.

Upon reaching the baggage claim you’ll discover our workers have yet to even figure out where your plane is, much less locate your checked bag. In fact we guarantee our baggage claims won’t run until at least 45 minutes after you’ve left the aircraft. Once they begin, they will run until four bags are on the conveyor belt before stopping again for 20 minutes. This cycle will continue until every bag is unloaded.

Except yours. Which we didn’t actually lose, but intentionally left at your gate of departure because it was easier to put it on a less-crowded plane that will arrive the day you fly back home.

Wear this shirt: While writing your contact information on a tiny slip of cardboard and affixing it via rubber band to your personal belongings. ‘Cause THAT will work.

Don’t wear this shirt: If you actually work in baggage handling.

This shirt tells the world: “You think I’ve got baggage? Ha! I only WISH I had baggage!”

We call this color: Olive My Underwear Are In That Bag! 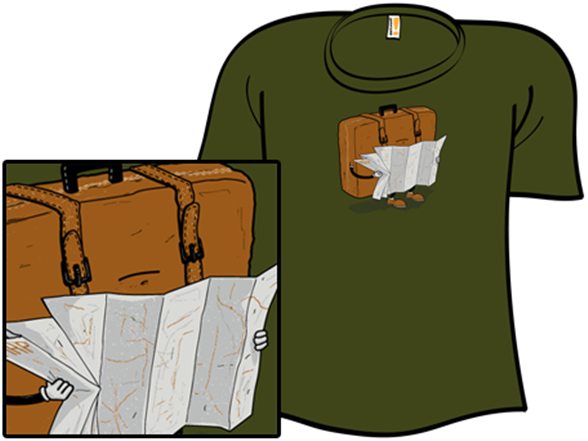 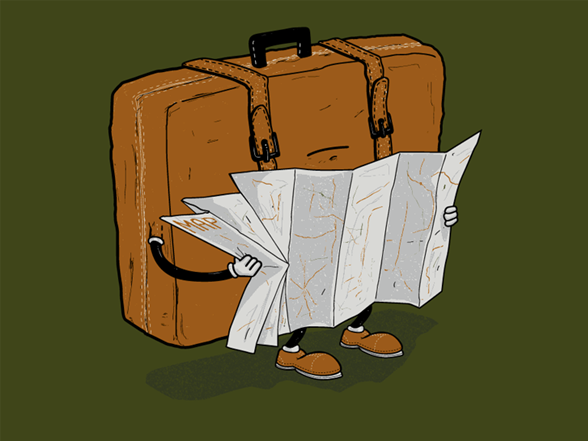 Matt Leyen is sorry about any inconvenience, sir or ma’am, but if you simply fill out your contact information he’ll be happy to contact you once your bag turns up. He’d also like to remind you that the airline accepts no liability in the event of lost or damaged items.