The rabbits nibbled as they sat, half-alert, half-dozing in the summer sun. Suddenly, Fiver raised himself on his hind-paws and begin sniffing toward the north.

“Look. Look. That’s the place for us.” Fiver said, his nose quivering. “High, lonely hills, where the wind and the sound carry, and the ground’s as dry as straw in a barn. That’s where we ought to be. That’s where we have to get to.”

Hazel furrowed his brow. “Fiver, I’m not sure if…” But Fiver was already hopping toward the hills in the north. He called back over his shoulder.

“Believe me, Hazel. That’s the place. That’s Watership Down.”

Bigwig awoke from his doze with a start. “Fiver, I think that’s just a mural.” He insisted, raising himself off the ground. “Slow down, buddy…”

Keehar, who had been soaring over the warren, chimed in. “You stupid bunny. Vere are going?”

“Away, to the hills.” Fiver called, ecstatic.

Fiver was running full-speed now. Suddenly he hit the painted wall, his skull and neck gave a sickening crack and he fell to the ground, motionless. His back paw gave one last spasmodic quiver, and his spirit joined the warren in Owsla.

Wear this shirt: As a mark of Efrafa

Don’t wear this shirt: Around people who are easily depressed about the future

We call this color: The Black Rabbit 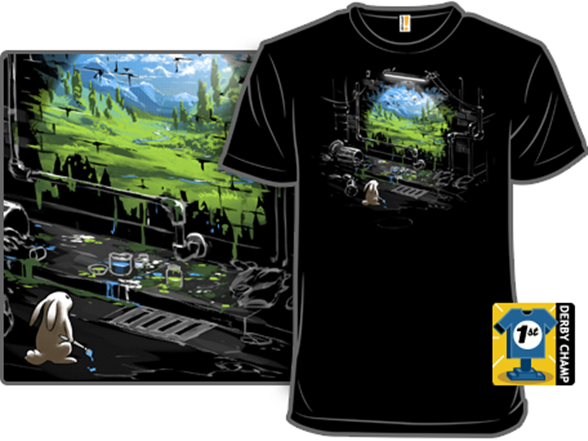 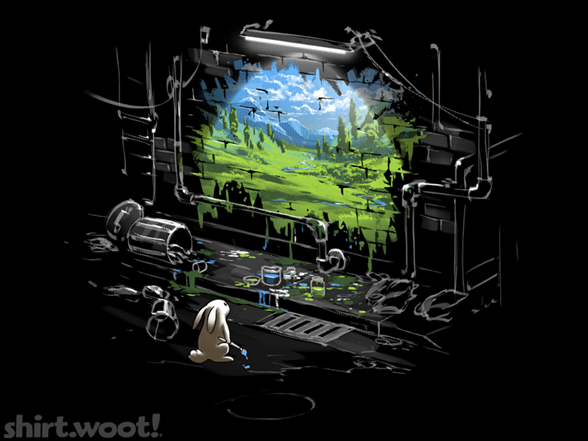 When not designing cute, depressing shirts, patrickspens usually just kicks up his heels and wallows in existential despair.