DAY 1 - Quite an eventful first day on the island. I hadn't gotten a mile into the thick forest before being confronted by a giant, living Tyrannosaurus Rex! I couldn't believe my eyes! Could it be that this beast is its species sole survivor and that it's been living quietly on this remote island undiscovered. I didn't have time to consider that because, sure enough, it spotted me and started chasing. I made a sharp left into some brambles, and luckily for me, while trying to make the same turn, the monster stubbed its toe. After that it just walked away making these frustrated-sounding noises.

DAY 2 - Well, I really hoped that I'd ridded myself of that dinosaur, but no such luck, for today, several miles from our meeting place yesterday, I saw it again. Still, I was left unharmed. This time it wasn't a stubbed toe that stopped him; instead, he raised his head to the heavens and roared fiercely. Then bit his tongue. Then got teary-eyed. Then ran away.

DAY 3 - A third day, a third encounter with the T-Rex! But again, I escaped safely. It actually didn't even acknowledge me this time; it just kept working at an ingrown claw.

DAY 4 - This time the T-Rex had me right where it wanted me. I had stopped to rest under a tree and nodded off for a moment. When I awoke, there it was staring straight at me. It roared again, without biting its tongue this time, and the chase was on. But here's the thing: when I looked back to see if it was closing in, I noticed, right under its left nostril, this giant, embarrassing booger. It was so gross, and I wondered, should I say something or not? I chose not. Well, it kept after me for nearly an hour. I grew winded, and so when we came to the edge of a lake, I decided it was time to give up and face my fate. However, just as he was about to chomp my body in half, he caught a glimpse of himself in the water over my shoulder, saw the booger, removed it, and gave me this sad look like, "This has been here this whole time and you didn't mention anything?" It was super awkward.

Wear this shirt: if you're the kind of person for whom wearing sandals is highly dangerous.

Don't wear this shirt: while walking with grace and elegance.

We call this color: silver-toed boots is what you need! 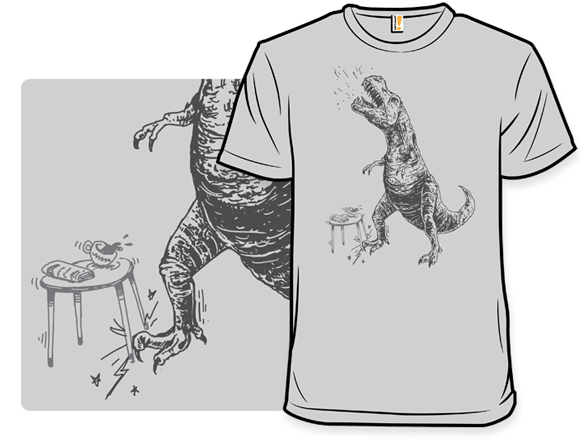 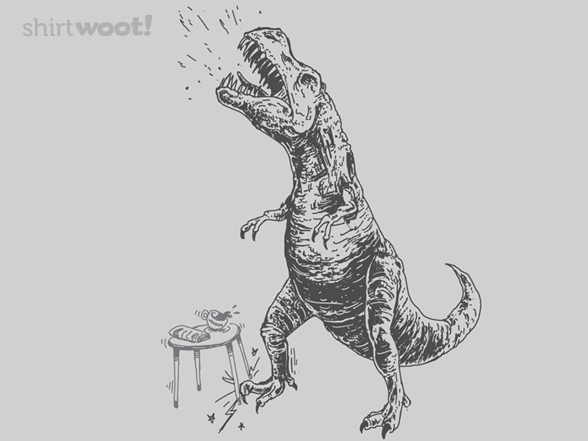 Dan Rule the artist should not be confused with The Dan Rule, which is, "Dan unto others as you would have them Dan unto you."