Fashion designers from Paris to Milan agree: owls are the future. And why not? They hunt, they stay out all night, they carry themselves with an aloof mystery at all times. Plus they leave teeny fur packages behind after they eat, showing that they’ve worked in the food service industry long enough to understand the concept of tipping.

Owls are associated with death in many cultures, just like Naomi Campbell. They’re also the symbol of Mensa, the society full of people who annoy everyone without regard to race, creed or culture. And when owls are in a group, they’re known as Funkadelic, and often find themselves sampled by hip hop producers looking for that “owl sound”. So throw out that little black dress and sell that tuxedo, because owls are what everyone will be wearing this summer!

This shirt was designed by: Justin Tolentino, director of such movies as “Pop Fiction”, “Deaf Roof” and the smash hit about the collection industry, “Bill Bill”. He is also known for his graffiti work, his found object collage and his paintings.

Wear this shirt: anytime a owl would be appropriate. We’re thinking Owloween, or any other major Owliday.

Don’t wear this shirt: if you’re part of a despotic owligarchy. Boo at you, sir, boo at you!

This shirt tells the world: “Just call my naaa aaa-aaa-aa aaame, and Owl be theee eeeere.”

We call this color: There Once Was A Man Named Owl Green/Who On Soulful Flying Was Keen/The Women Would Sigh/But He’d Always Decline/And Take Care Of His Daughter, Kelly Green. 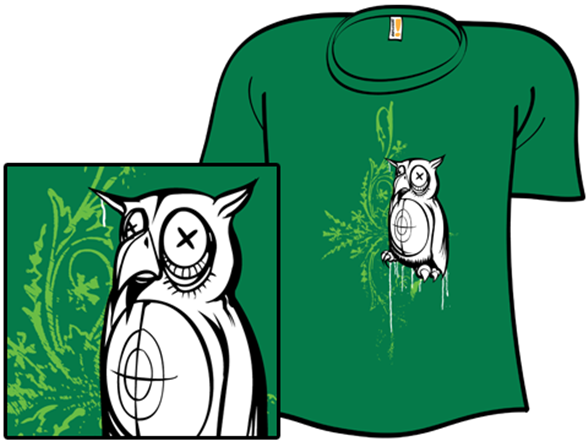 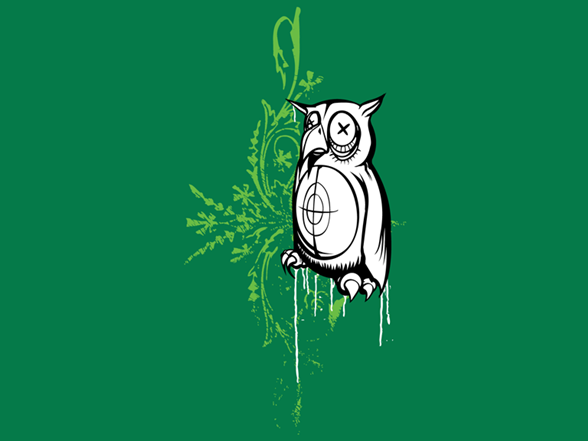