To the few who love me
And whom I love
To those who feel rather than those who think
To the dreamers and those who put faith in dreams
This one’s for you guys
Uh, uh, uh, uh, uh, uh
Verse one.

Who’s that knocking at my main chamber door?
Rappin’ 1-8-7, got me down on the floor
Hear it low, dull and quick, like some other site’s material
They tearin’ up the floorboards but his heart’s inside my vehicle
Rolling back to the crib, tell my girl that I missed her,
Still keepin’ it real, she’s the daughter of my father’s sister
Five-oh askin’ questions ‘bout Montressor’s end
But I walled that GUNSHOT SAMPLE up down in the den

Four in the morn, I’m weary way-worn
Fallin’ down in the gutter, can’t find my way home
Throw back a few forties, there’s a rattle in my breast
Goin’ through the seven chambers, arm in arm with Red Death
I reach’d my home—my home no more!
Sharp pend’lum high swingin’ stone cold metaphor
Got an uncertain curtain hurtin’ purple that bird is lurkin
Lenore I ain’t forgettin’ but I ain’t gettin’ no abettin’ sentence
She was a child then, but hey, I was too
Maybe one day by the sea we can raise a little crew

Wear this shirt: while driving your Eldorado. Throw some hydraulics in that, it’ll really look good.

Don’t wear this shirt: and assume it will protect you when a dwarf jester wants to light you on fire. Because it won’t. We’re just telling you now.

This shirt tells the world: “A good mustache makes the man.”

We call this color: A Life As Cold As The Heather Gray-ve 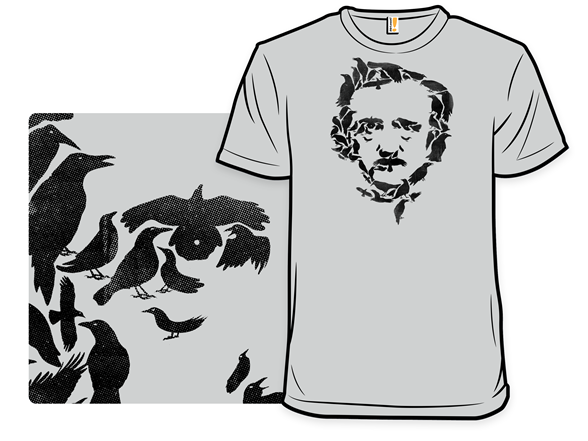 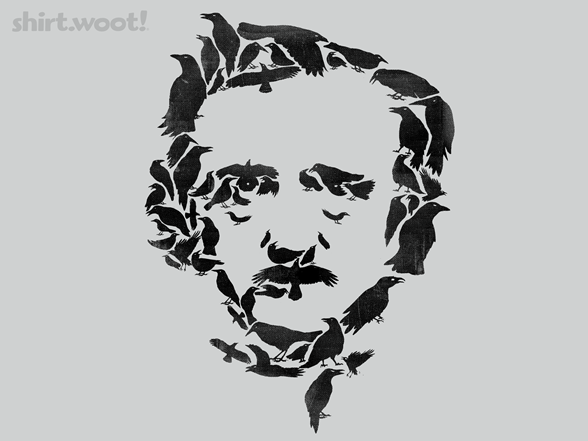 João Lauro Fonte’s next shirt will feature a portrait of H.P. Lovecraft made of a dozen itty bitty unspeakable horrors. Many nerds will die before they can click the “I Want One” button, but damned if they won’t die trying.