The sad part about Hollywood movies is how they’ve changed our sense of scale. Take a good look at that car, and the gorilla under it. That gorilla has to be about ten feet tall, give or take. Now, admittedly, that’s a pretty big gorilla, but he’s no King Kong. And for people who grew up with Godzilla and Cloverfield a ten foot tall gorilla won’t be as scary. Sure, you’ll run for your cameraphone before you even take a breath, but you’re not going to panic and flee the city. You’ll just go up on the roof where he can’t reach you and Twitter for an hour or so until Animal Control gets there and takes him back to the lab. Maybe he’ll even apologize once he learns sign language.

Of course when the cute little tanks drive in things might seem a little different. Tanks make everything more serious. But don’t pretend you won’t start giggling when an octopus wearing a headband comes running up out of nowhere. Especially when he grabs the tank. What’s he going to do with that anyway? Doesn’t he know the firing mechanisms are people sized and also on the inside? That octopus is going to get hit in the face with a car and he won’t be able to do anything to stop it. Full in the face.

If you didn’t notice, this is the 21st Century. Screenwriters always show people running away but in a world like this, the appearance of a Monster Island would result in thousands of dot-com millionaires rushing to a real estate agent. That guy with sixty five different Megatrons isn’t gonna care if he has to rebuild the summer home once every three months. Not if he gets to see an frustrated octopus trying to learn marksmanship each July. Why even pretend otherwise? If this was happening in the middle of your street wild horses couldn’t drag you away.

This shirt was designed by: Leon Ryan, who has a wonderful bio on his site. Unfortunately, the site is in Flash so we can’t cut and paste it and we’re not writing all that out ourselves. Leon, it’s funny and all, but it’s way too long. We’ve got things to do, dude.

Wear this shirt: when you’ve just got to play Rampage. Hey, Midway, an octopus patch would be great.

Don’t wear this shirt: when you’re in the middle of the street being dragged away by wild horses. Totally bad for the fabric.

We call this color: Vehicular Asphalt And Battery 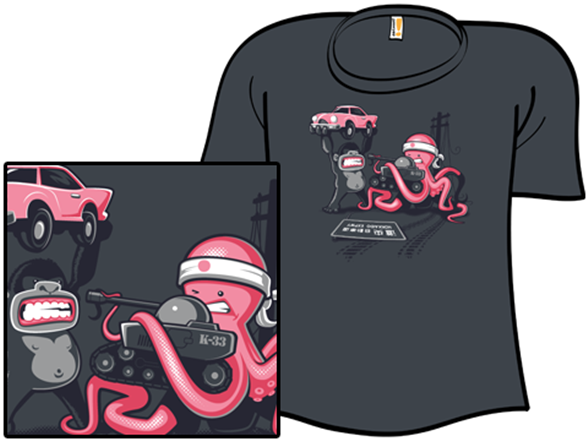 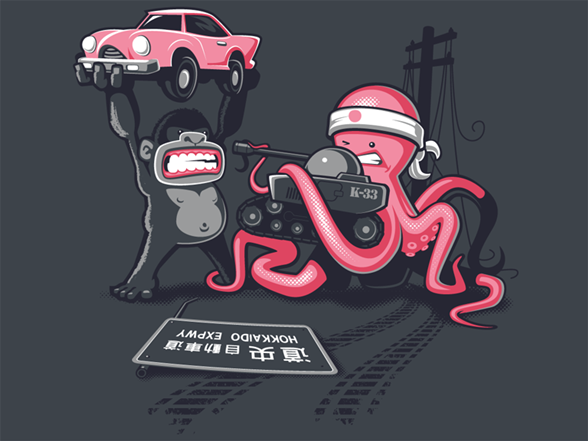