I wouldn’t exactly give him the award for World’s Greatest Dad, but he had his moments.

Merrp was a decent father, but an even better monster. It’s not like he yelled a lot or brought his work home with him every night, nothing like that. The problem was, he just didn’t always come home. Totally married to the job.

Don’t get me wrong, we never wanted for anything. He was a great provider. But sometimes a little monster just needs some quality dad time, ya know? He always promised me we’d have a catch in the back yard, throw around a human every now and again. I can recall doing that just once. When I accidentally dropped her, she started running. He got frustrated and just ate her instead. Game over.

But there was this one time I remember, he took me along on one of his rampages. He showed me how to smash buildings and fling cars. Then when the helicopters came and they started up with the flamethrowers, he took me to this empty field way outside of town.

There, in the moonlight, he showed me how to make shadow puppets. We made Godzilla, Nessie, and even the Abominable Snowman. But the funniest one was when he made one of Mom. Looked EXACTLY like how she looked first thing in the morning. Of course I never told her about that. But man, that was a good night.

Wear this shirt: to remember the good times.

Don’t wear this shirt: if your dad was a deadbeat. It’ll only stir up painful memories.

This shirt tells the world: there’s a little shadow monster inside all of us.

We call this color: I dream in all colors, but mostly navy. 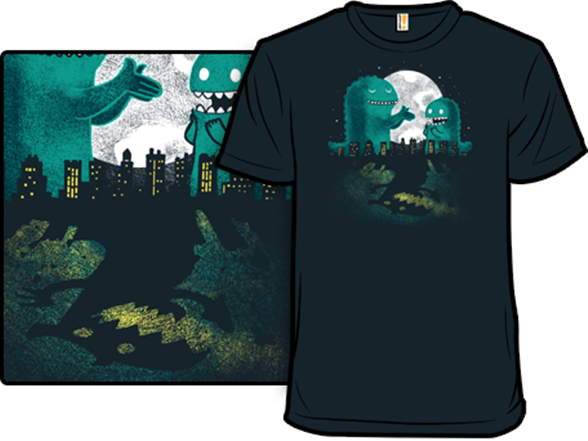 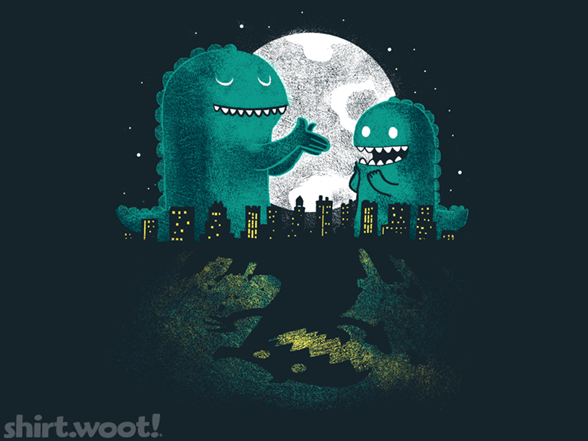 Anna-Maria Jung longs for the good-ol’ days. The days of running amok and wreaking havoc on a thriving metropolis. A time without TVs and computers and smart phones, when having shadow puppets was having enough … because you had each other.