Now let’s not get ahead of ourselves, Kelsey. Clearly we have some work to do before Regionals.

I don’t wanna take the wind out of the little gal’s sails, but let’s just say she didn’t have a whole lot of competition. In a class of 27 kids, 22 are damn near illiterate. I blame the parents. Learning begins at home, folks.

I thought maybe I had a few good contenders, but then Joshua said “cat” was spelled with a “K” and Emma asked me to use the word “bath” in a sentence. Turns out she only gets one once a month, when the water’s not frozen in the hose, of course, and after all 13 of her brothers and sisters have been sprayed down.

Jaxxssonn looked like he was going to give Kelsey a run for her money, but then in the last round he added three “S’s” to “Bus.” Can’t say I’m surprised. His name is setting him up for failure.

Don’t get me wrong. Kelsey has potential. I’m just afraid she’s going to get eaten alive at the Tri-County finals. Rumor has it one kid knows the difference between “to,” “too,” and “two.” There’s just no way we can compete with that.

Wear this shirt: if you know that “Bee” really only has one “E.”

Don’t wear this shirt: if you still don’t get the joke.

This shirt tells the world: “Hey everybody! Come see how cute and ironic eye yam!”

We call this color: vocabulary of a baby blue 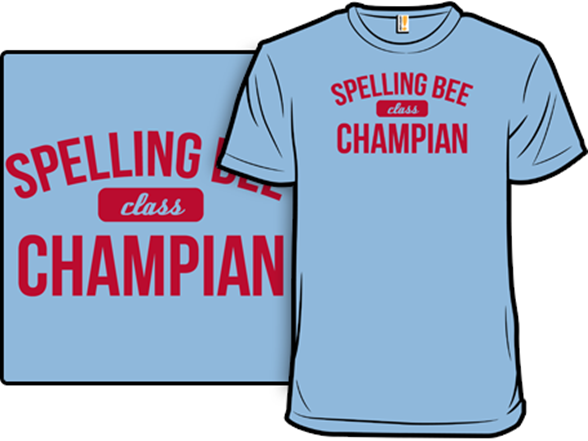 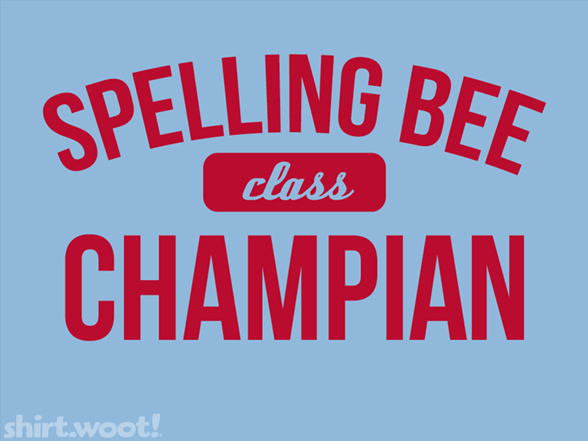 On the weekends, you can find Danielle Furman at home, polishing up that 2nd-grade trophy. No, she never actually won a spelling bee. She just stole it from the 8-year-old down the street.