Say what you want, but I could watch him do that all day.

One trick? ONE trick? Man, you’re buying into the marketing! That’s what Big Media wants you to believe! The truth is, any pony who can pull a rabbit out of a hat also has the dexterity to pull levers and hold saws, which means he can easily handle more complex stage magic. Do you think David Copperfield sets up his own tricks? Give this pony an assistant to handle the delicate wiring and he’s got six weeks at the Vegas Tropicana locked down!

It’s just too bad this pony’s such a prima donna. See, back when he was starting, he was in a restaurant and ran into Ben Brantley from The New York Times. Like, literally ran into him. Ben Brantley was eating dinner and was like “Ha ha! Hey, watch it, you silly pony!” But the pony had been drinking, so the pony was in a mood, right? So the pony decided to stomp three times and shake his mane, which in pony is like the WORST insult. Ben Brantley was aghast, but he had nothing to prove to a pony, so he tried to play it off as a big joke. Only the pony wasn’t having it.

Instead of walking away, the pony leaned in and stole one of Ben Brantley’s carrots, and Ben Brantley was all “Oh, no, you did not just steal one of my carrots, you swayback nag!” Then the pony did three stomps again, so Ben Brantley stood up and took off his shirt and was like “I’m right here, Flicka, let’s ride!” and the waiter ran over and suddenly one of the rabbits in the pony’s entourage threw a punch at one of Ben Brantley’s interns and the whole place just sort of exploded into violence, and the next morning, there was a big photo of Ben Brantley with a black eye on the front page of The New York Post. And everybody knows, if you want good press, you never help The New York Post score a point on The New York Times.

You ask me, this pony just needs a good agent and a P.R. specialist. And maybe anger management classes for those rabbits. They’re bringing him down.

Wear this shirt: if you’re Michael Ironside. But we’re not slammin’ ya, dude, you do your thing well. At least when you show up, people know what they’re gonna get.

Don’t wear this shirt: if you’re Daniel Day-Lewis. Unless it’s the sort of shirt your character would wear! Because then it would be okay.

This shirt tells the world: “Yes, but if you add a second trick, they just yell at you to do the old stuff again.”

We call this color: Mrs. Brown, The Rent Might Be Late Again This Month, But I’ve Got A Bunch Of Auditions Coming Up, Honest 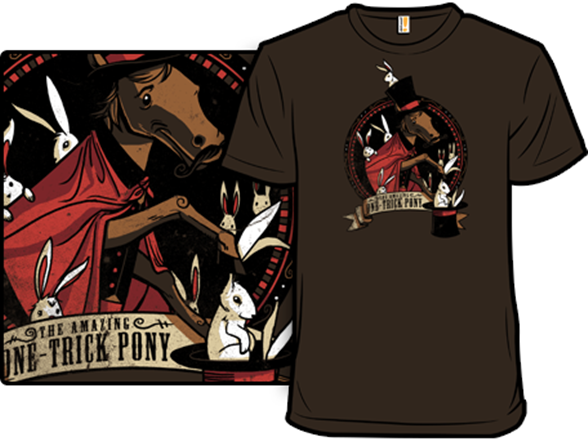 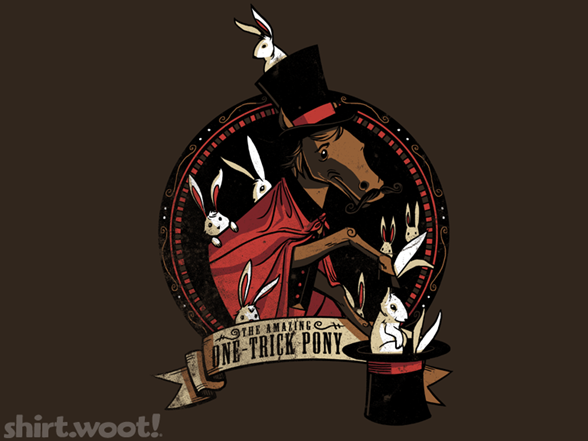 Ironically Drawsgood is actually not very good at drawing, he’s just excellent at delegating and hiring the right people. It’s all very Warhol, you see.