“The turned soil, the blood, the feathers,” said Lt. Ava Ornis of the Green Meadow Sky Patrol. “These crimes clearly fit a pattern. We’re up against someone who is very smart, and very hard to catch.”

The fact that the disappeared were all last seen near wormholes has some residents fearing the local worm population.

“We’ve been eating them for so long,” said a frightened mother of six, who declined to give her name. “Would you be surprised if they wanted vengeance? My kids are afraid to walk on the ground.”

“Yes, I’m scared. Very scared,” said Jay Robins, a construction bird working at a large nest site near the pond. “I think somebody needs to go down into those holes and knock a few heads until they get to the bottom of all this. That’s the only language these worm bastards understand.”

But officials warned the public not to jump to conclusions.

“We’re doing all we can to find and, we hope, eat the perpetrators of these crimes,” Lt. Ornis said. “But until then, we remind our fellow birds not to fear the worms. There’s just no way any worm could be smart enough to kill birds.”

This shirt was designed by: designer/illustrator/photographer/Canadian Jim Gray, DBA Rocket Raccoon. He once grew a handlebar mustache on a dare, so don’t come at him unless you’re ready to get rough.

Wear this shirt: to give your invertebrate enemies an inflated sense of their own power.

This shirt tells the world: “Mess with the geek, you get the steel-jaw trap.”

We call this color: The Hunter Becomes The Brown. 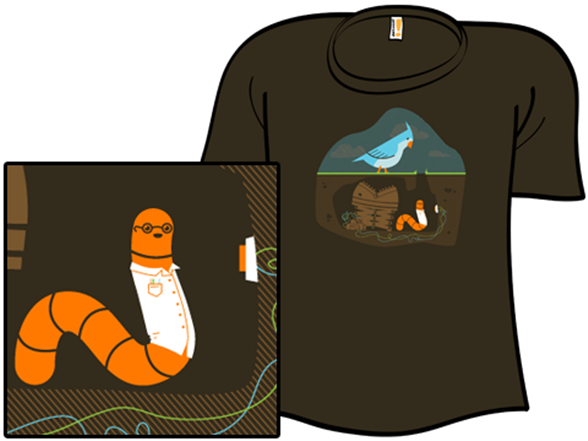 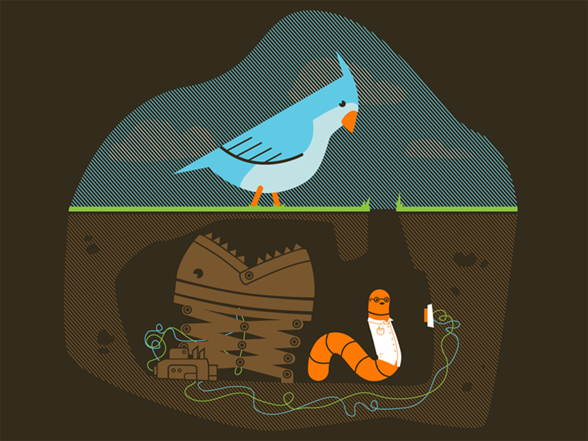