Well, a lot of those old stories’ve run together in my head, but sure, I’ll give it a shot.

So there was this girl, Alice. Or Dorothy. Or something. Dalice. Let’s just call her Dalice. Anyway, she lived with her stepsisters in Kansas and one night after a royal ball, her slipper fell off and a rabbit stole it, and so Dalice chased it down a rabbit hole into a magical world where she met the Tin Man. And a giant flying dog thing named Falcor. Her and the Tin Man rode around on Falcor and the Tin Man showed her all sorts of cool stuff, like the area’s famous lion, witch, and wardrobe. Then Dalice and the Tin Man fell in love and decided to get married.

Dalice was like, “I’m totally pumped about this wherever we do it, but I always wanted to get married in a garden,” and the Tin Man was like, “I know a garden where the flowers are animals and people and stuff.” And Dalice was like, “I’ve never seen such a place! It sounds dope!” So they went there.

In attendance were a dandy-lion, a tiger-lily, some snap-dragons, and a daisy who oversaw the service. When the daisy asked if anyone had any objections, a rose stood up and said, “I do!” And Dalice was like, “Richard, what are you doing here?” and the Tin Man was like, “You know that guy? I thought you’d never been here before!” And Dalice was like, “I lied.” And the Tin Man was like, “Well, you’re not the only one keeping secrets.” And he lifted off his tin head mask and revealed he was actually a prince. Then he jousted with and killed Richard the rose and everything was cool again, maybe even cooler than before with the whole prince thing.

After they got married they decided not to move back into the prince’s castle, but instead to a modest farm where all the animals represented politics.

Wear this shirt: if you’ve been lost at sea for weeks and then you see a tiny blip in the distance and you wonder, land?

Don’t wear this shirt: while damaging property with a giant reptile. You want to be as inconspicuous as possible so that the property owners bill the lizard.

This shirt tells the world: “Well, you can tell by the way I jabberwock, I’m a flower’s man, no time to talk.”

We call this color: Creme – like a white rabbit who hasn’t showered in a while. 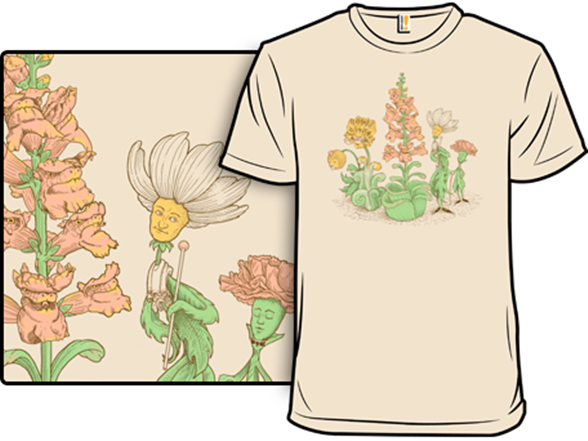 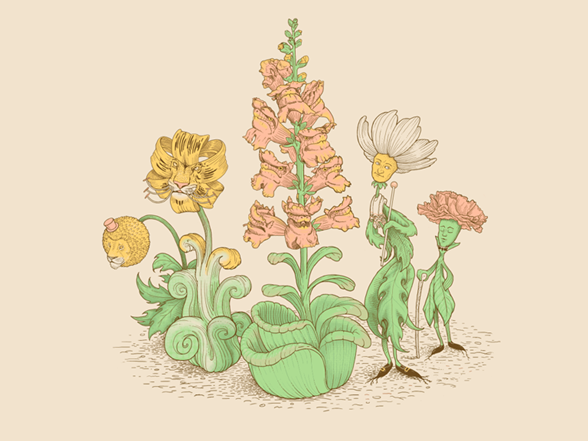 Jillustration is such a jillustrious artist, but she can also be kind of a jillinquent at times.