The story of our nation? Well, that’s hard to explain, but on the other hand, it’s very simple. This country started with foreigners, some people from another land pulling up to a window and demanding an order to go. Back then, there was no country, you see, just a bunch of loose ingredients tied together.

The patties came first, just colonists. And they made some mistakes, sure, but that special sauce really opened up the mid-Atlantic region. Then the lettuce, and the cheese, and we needed a little more room. Across the natural boundaries we found Pickle Territory, and some people might say we should have left them off, and maybe they’re right, considering the cost. But that’s in hindsight, and anyway, without that push we might never have made it to the onions on the coast, and our sesame seed bun might never have been completed.

But we still weren’t done! Because after our burger was completed, we still needed to pick up some fries from a Russian guy, and then liberate a few squirts of ketchup as part of a promo we were doing with these pineapple guys. And that’s how we got the big meal deal we call… America.

Oh, and don’t forget about the toy! You’ve got your choice, would you prefer Puerto Rico or Washington D.C.?

Wear this shirt: then try to trade it for poutine and tamales under existing NAFTA rules.

Don’t wear this shirt: if it’s still pink in the middle. You could be risking e. coli infection.

This shirt tells the world: “That better not be Kobe beef in there.”

We call this color: McBrownalds 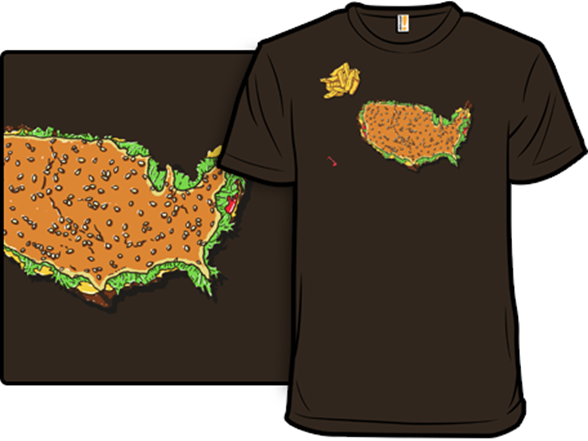 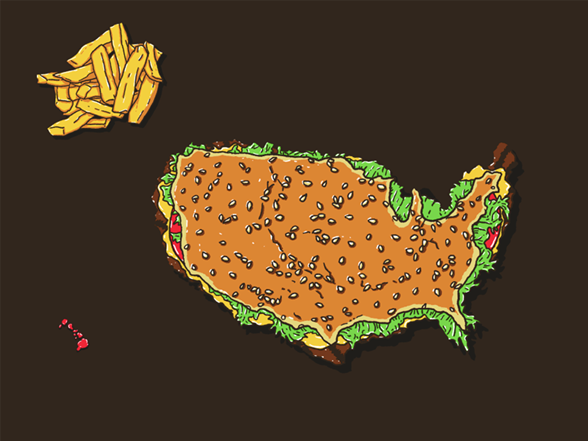