Let the record show that Shirt.Woot totally had a chance to get a cute bunny on a shirt and missed it entirely.

I’ll forgive the artist’s glaring omission of Rudolph, Jonathon Lipnicki’s vampire best friend from the EPIC film The Little Vampire. I’ll also overlook the colossal lack of Cassidy from the graphic novel Preacher due to the obvious bias towards vampires that have graced the small or silver screen.

But no Bunnicula? Really? For shame, Shirt.Woot. FOR SHAME.

What gives? Sucking the juice out of vegetables isn’t good enough? There are AT LEAST two vamps on this shirt that don’t drink blood, you know. Heck, one of them is a puppet, for Vlad’s sake. And Bunnicula had a cartoon movie, so you can’t use that to rule him out. Sure, it was an awful ABC Weekend Special episode, but it was better than any of the Blade or Twilight movies, that’s for sure.

Look, I’m not crazy. I’m just passionate about vampire rabbits, that’s all. If you want crazy, just wait until the David Boreanaz Fan Club finds out you chose Spike over Angel for this thing.

Wear this shirt: and try to look unsuspicious while loitering outside a blood bank.

Don’t wear this shirt: while trying to cross running water at high noon on your way to a garlic factory that you haven’t been invited inside.

This shirt tells the world: “No pictures, please! Not unless you want to see me shirtless, anyway.”

We call this color: Blood Red (Look, they can’t all be winners.) 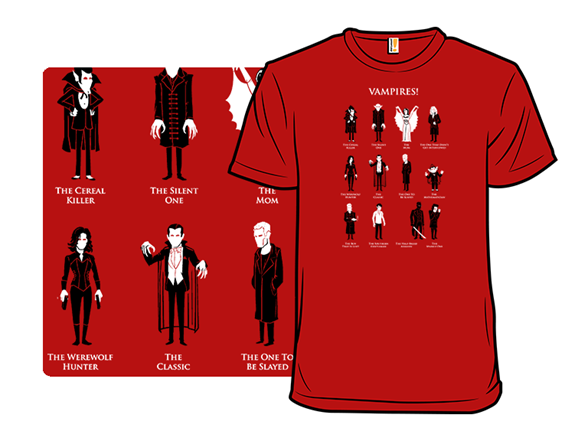 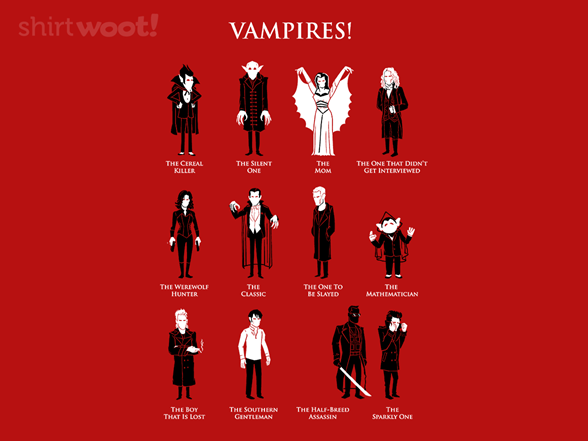 Ben Douglass really wanted to do a “Mummies!” shirt, but trying to find twelve of those in pop culture proved too difficult.