Told you to talk to me, huh, kid? Told you that I’m the guy to learn from? Yeah, I saw some things while I was a diver. Where they putting you next? The bathtub? Wild place, the bathtub. You’ll see some things in there. I once saw the moonlight off a pink washcloth fresh from the towel rack. Never forget something like that. But it ain’t all pretty underwater.

My best buddy got eaten by a shark out in the kiddie pool. Yeah, they say we can’t send our boys out there but we still go. We get them in the tub sometimes as well. Just part of the game. Anyway, my buddy was just doing some recon and didn’t check his Eight and then boom, out of nowhere. He didn’t even have time to fight it.

Those sharks out there scare the hell out of me. They get wound up too tight sometimes, see, and you can’t stop ‘em. They just charge at you, and if they miss they keep right on going. Don’t even turn around. It ain’t personal with them. Just clockwork. Scares the hell out of me. You can’t reason with something like that.

Stick to the bathtub, kid, and you’ll be okay. We shouldn’t even be out there in the yard anyway. It’s a stupid world we live in, huh, kid? Sometimes feels like it’s been designed by two year olds, just playing some game. Guess nobody said it was gonna be easy, though.

Hey, kid, when you get off shift, you come find me. I’ll show you this great little bar under the sink. It’s near where they keep the sponges, you can’t miss it. And don’t you worry. I’ll look after you till you get your sea legs.

This shirt was designed by: Brian Walline who also designed our shirt Live Wire. In addition to that, Brian works with Diamond Hawk Graphics and Dinosaursatemyshirt.com. We presume their office is full of hungry dinosaurs. You know, like the boardrooms of the oil companies.

Wear this shirt: because in the event of a shark bite, you can rip it into strips and use them to stop the bleeding. Remember: the more shirts you buy from us, the better your chance of survival.

Don’t wear this shirt: unless you are accompanied by two friends who are dressed as pilot fish. Hey, that gives us a great idea for Derby #52!

We call this color: Oar Ey Bull. Which is not only how a pirate expresses displeasure but also an anagram for Royal Blue. See how clever we are? You can post your lauds in the comments. 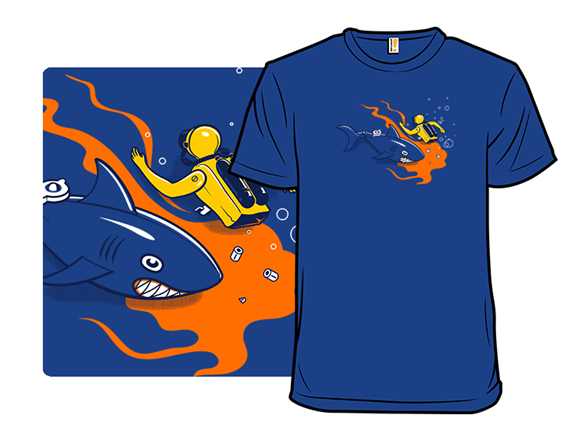 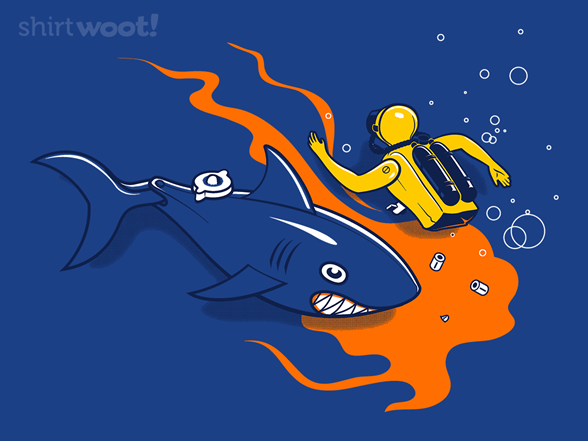