You see, time is like a shirt, and the traveler like an ant on the shirt. The ant only really goes in one direction, and that’s forward, across the shirt. But imagine that, somehow, the shirt got folded. Now the ant is just walking along, happy as can be and then, suddenly, Mr. Ant is on the sleeve that’s six hundred steps in his future. Or even stranger, he’s down at the hem that is twenty steps in his past and over ten relative ant miles away from his starting point.

Of course he could go back and try to explain it all to the other ants but they’d never believe him. Poor Mr. Ant would be reduced to writing a book about the Freemasons and their connection to the Lizardmen from the Upper Harmonics. Sure, it would sell well, but he’d always be left wondering if he was just crazy. “Maybe I imagined it,” he’d say to himself at night.

But he wouldn’t have imagined it, because that’s how a wormhole works. Only time doesn’t come in fifteen different sizes. And you don’t really want an ant walking all over your nice new shirt.

This shirt was designed by: briannyc128, who didn’t like any of the jokes we made in the first version of this, and so went back in time and killed all of our grandfathers, resulting in an entirely different universe. Remember, the mods didn’t delete your stupid derby entry that broke the rules, it was just the time stream correcting itself. Rest assured, the time stream can correct itself AS MANY TIMES AS REQUIRED.

Wear this shirt: if you’re using the Time Scoop to move a Raston Warrior into the Death Zone around The Tower Of Rassilon.

Don’t wear this shirt: if you’ve gone back in time to a point before you took it out of the closet so that you could wear it when you went back in time. That’s a paradox just waiting to happen.

This shirt tells the world: “I’m opening up the Gamma Quadrant!” 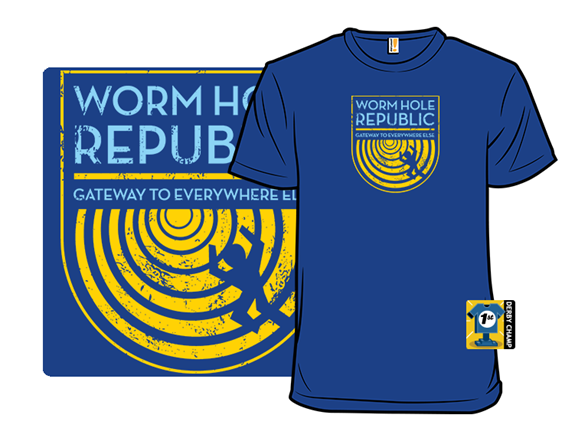 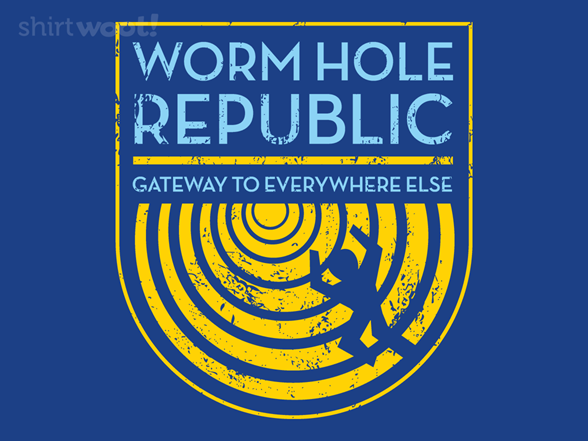