First I didn’t know what was worse: being eaten alive by ravenous brain dead cannibals, or being partially eaten and infected with this virus or whatever, slowly dying only to rise and stalk my friends and family. I had no idea how much worse it could be. I’m fully conscious, aware of every moment, but trapped in a body completely taken over by a primal drive to consume living flesh while my mind screams in agony, feeling every deterioration as my body rots away.

And the horrors I saw before I died have completely left me, replaced by the infinite terrors I have witnessed firsthand as my possessed body has run down victim after victim. Their horrified screams and the splashing of their blood still echo in my mind. I can still TASTE it. I’d throw up if my brain stem had any control over my digestive tract. I’ve had to watch paralyzed, like a helpless observer in a movie watching the monster through security monitors but unable to warn the stalked prey. I can see through my own eyes, but I can’t blink. I can’t look away. I fight desperately to hold my weathered, bony hands down at my side but I can only watch them rise up to strike and grab and claw.

I try to scream or cry out, even to bellow in the darkness so as to give away my position before my shell of a body can sneak up on them. Once I was able to manage a barely audible “Mrh?” but it only lured a concerned citizen closer. I wept as my body devoured them, their screams turning to cries for help, then cries for mercy, then soft gurgling, then silence.

I’m a prisoner. I’m forced to endure mental tortures no human psyche can withstand without fracturing and splintering. I see endless mutilations, death, and dismemberment. I feel my own body as it absorbs gunshots, stab wounds, even fire. I pray that someday someone is able to fight back, to win, to destroy my neural cortex and with it any danger my body might pose to the world. I simultaneously fear that it won’t be enough to set me free; that the only thing worse than being stuck in a rotting cannibal’s body would be to be stuck in a dead shell, only the ground or sky to look at, for as long as it takes me to be buried or burned or rotted away.

Wear this shirt: While staggering and stumbling clumsily into your local Subway, Quizno’s, or Penn Station. And for god’s sake sober up.

Don’t wear this shirt: If you just like turtles.

This shirt tells the world: “As much as I love daydreaming about running through downtown like a madman with a shotgun, you can safely bet that I’ll be the first to die in any real apocalypse.”

We call this color: Brrrroooooooowwwwwnnnnssssss 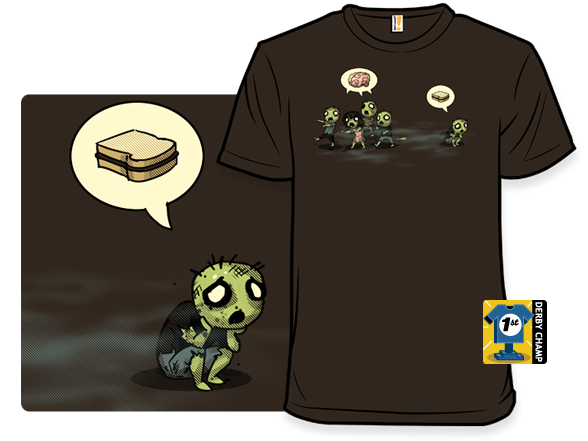 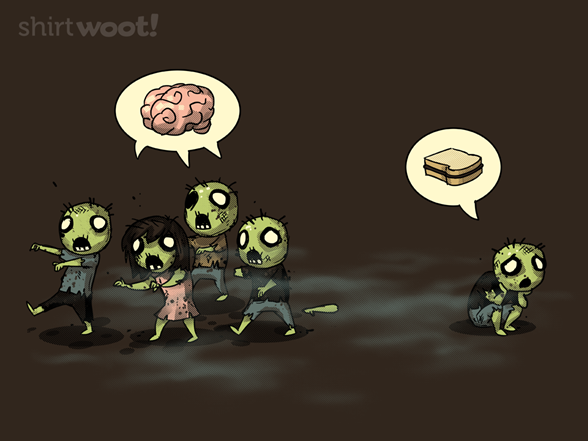