Criminy, somebody get that rookie outta here before he pukes all over my crime scene! I tell ya Five, I been workin’ these streets what seems like my whole damn life and they still find ways to shock me. Look at this: I knew this kid. Eight was his name. I lived on the same floor as his mom when he was just a fraction. His pop was never around; kid fell in with a bad element, and now some patrolman has to knock on his poor mother’s door and tell her that her gangbangin’ son is dead.

Looks like these boys got a little too brave, hustlin’ protection money on the Alphabet Boys’ turf. Look at this: two to the back of the head, execution style. But then the knives came out after. This was messy, but it was messy on purpose. This is sending a message. Poor sons o’…

Five, get the Chief on the phone. Because he’s about to have a gang war on his hands, that’s why. We’ve got to get to Los Numeros and try to convince them to keep the peace. They’re going to want retaliation. We can’t have blood in the streets again.

And for god’s sake somebody get a sheet over these integers.

Wear this shirt: to The Count’s house. He’s going to have a blast with it.

Don’t wear this shirt: on the day before you retire from the force. That’s the day you’re most likely to get shot and ruin this shirt (and you) with a bullet hole.

This shirt tells the world: “No, son. Let’s walk down and count ‘em all.”

We call this color: Asphalt with a Deadly Weapon 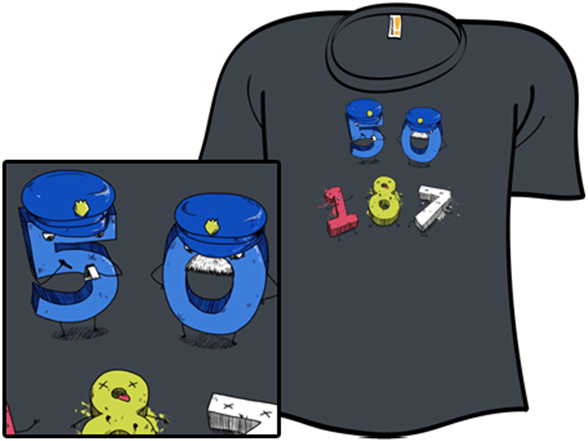 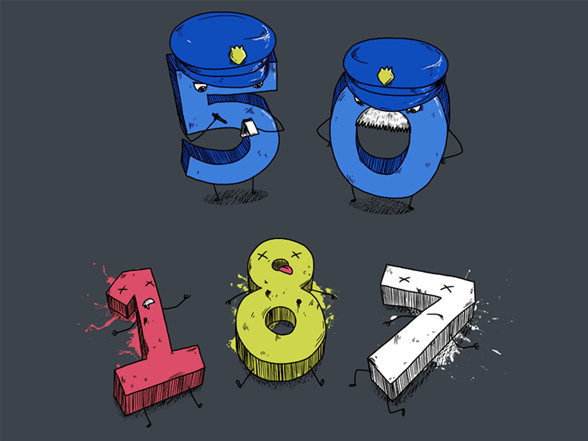 piidesign was raised by squids in an updated take on that classic Kipling tale. Unfortunately, Disney executives ended up buying his story just so they could shelve it and do a kid-friendly version with Robin Williams voicing the squid.