It’s not like a rainbow’s ever going to get a job in a bank or something.

We should probably clarify a few things here. See, a rainbow isn’t ACTUALLY a sentient creature. A rainbow’s just light, and even then, light that’s kinda reflected a little bit. Okay, YES, guy about to post in the forums, you ARE right about that point you want to make regarding our non-scientific use of “reflected” but you get what we’re saying, right? A rainbow doesn’t actually have a lot of long term potential in the first place, so reading isn’t actually going to open up any doors.

In fact, there’s a good chance it might hurt the rainbow long term. We all know what rainbows are for, right? See a rainbow, find the pot of gold! And if you think really hard about why leprechauns might employ a rainbow in that situation… exactly. Because a guard that can’t read is a guard that can’t outsmart his boss. And what’s going to happen if some well-meaning idiot like that guy about to post in our forums with a nine page dissertation about refracted light starts helping the rainbows learn to read? You guessed it. They’ll all lose their jobs. And unlike, say, human beings, a rainbow can’t find a new direction in life. A rainbow can do exactly two jobs: look pretty and be on Dark Side Of The Moon and any related tribute albums, and do you know how hard it is to break into the record business these days? Especially if you can read?

The days of “math rock” are over, Rivers Cuomo. Let the poor rainbows be.

Wear this shirt: to show you don’t EVEN need green in your world. Don’t EVEN.

Don’t wear this shirt: and think you can collect money to use as a tax dodge. Still gotta file the paperwork before you can be a non-profit.

We call this color: Baby Blue Has A Friend Named Baby X-Ray But The Grown-Ups Can’t See It So They Say He’s Imaginary 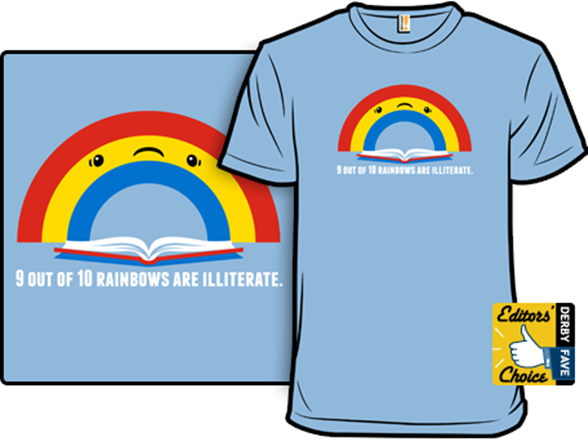 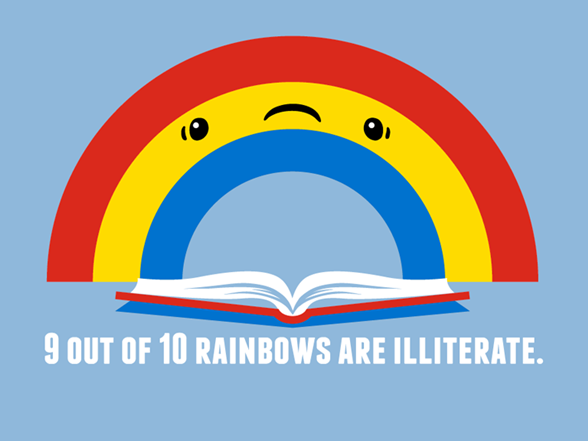